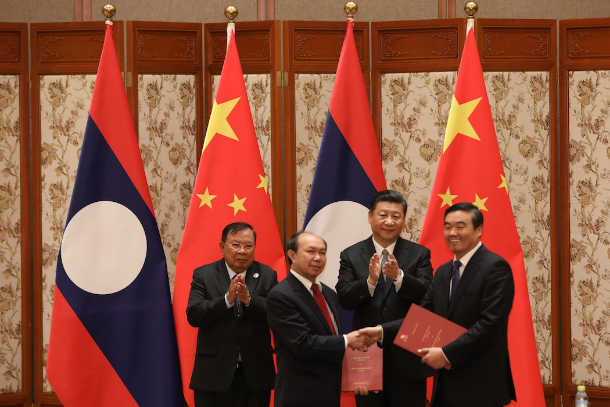 Laos' President Bounnhang Vorachith (back left) and Chinese President Xi Jinping (back right) clap during a signing ceremony after a bilateral meeting at Diaoyutai State Guesthouse in Beijing on May 16, 2017. (Photo by Wu Hong /AFP)

Fifty years ago, the little town of Luang Prabang in Laos threw its hat in with the United States, allowing a “secret war” to be waged against Vietnamese communism from its airfield. Each day T28 fighter bombers operated by the Central Intelligence Agency took off loaded with shells, rockets and bombs to drop on North Vietnamese forces passing through Lao territory to reinforce their comrades fighting in the south.

As the center of the old royalist Lao culture, residents were staunchly in favor of the campaign against the communists, especially when the home-grown communist guerrilla movement, the Pathet Lao, controlled wide areas of the countryside.

“We were happy to have the Americans here because we thought they wanted to help us. In the end, we realized that they were only helping themselves,” recalls one businessman in Luang Prabang who was a schoolboy at the time. Such is the dilemma of being a small country being fought over by giants.

Today, Luang Prabang is a booming tourism center filled with visitors who appreciate its UNESCO status, earned from the preservation and continuing conservation of its French heritage quarter. But while the old royal and religious capital may be an economic success, that cannot be said of the rest of Laos.

“Our young people graduate from school and go on to university but when they graduate from college they still can’t find a job,” says one hotel operator. “There are very few offices, no factories, nowhere.”

That’s despite the World Bank’s description of the country as one of the fastest-growing economies in East Asia, with gross domestic product (GDP) growth averaging 7.8 percent over the last decade. That’s not so hard when the growth has come from a very low base, with income per capita in 2017 standing at only US$2,270.

Coveted jobs in the bureaucracy are open only to those with cherished connections, and the lucky few who find work in the modern sector are in contrast to many more who scratch a living through agriculture.

A part of the problem is size. With a population of only 6.8 million, Laos is not a market for anything and while it’s a member of ASEAN, as one of the low achievers in the Southeast Asian club, it’s not the first place investors tend to think of. Its status as one of the world’s few remaining communist states doesn’t help.

The answer, to the government at least, is China. Its position as a buffer state between the other nations of Indochina and Thailand makes it strategically important and it has major reserves of energy.

Railway comes at a price

China says it wants to change Laos from being a landlocked country to a land-linked one. It is doing so by building a US$5.8 billion railway from Kunming in southern China to Vientiane.

According to Bangkok-based observer Peter Janssen, Laos will have to come up with an immediate US$720 million to fund its share of the initial cash needed for the railway. Of this, US$250 million will come from the national budget over the next five years and the remaining US$470 million has been borrowed from the Export Import Bank of China.

To some, all that debt is a warning that Laos could face the problems of other countries that have jumped too high onto the Chinese Belt and Road Initiative (BRI). A report by Bloomberg cited the Washington-based Center for Global Development as identifying eight nations at risk of debt distress from Chinese financing, among them Laos.

In June last year, Lao Prime Minister Thongloun Sisoulith insisted the debt wasn’t a problem, even though the project cost is nearly half of the country’s annual GDP. The country needed to invest as part of the country’s aim to graduate from least developed nation status, he said.

In an Asia Times article, Janssen said he had been told by well-placed sources that the deal with the Chinese was less than transparent, and there was talk of significant concessions on resources such as bauxite.

That rings bells for many Laotians. “They take everything,” noted one businessman. “We are told our forests are going to be conserved but every year there is more cutting of mahogany and teak and it is all sent to China. For local people, timber is already expensive.” That’s a dramatic change for a country where houses are traditionally built of forest hardwoods.

Economic domination could soon be followed by an influx of Chinese nationals. There is talk that some 30,000 Chinese workers are building the railway and that they are supplied solely by Chinese firms in a typical pattern of Chinese investment under the BRI.

The railway, once completed at the end of 2021, is expected to flood Laos with Chinese manufacturers and tourists, with Chinese entrepreneurs again expected to cream off the economic gains.

Some say Lao nationals tend to take the easy way out and hand over enterprises to Chinese to run, but for many Laotians the future looks increasingly fraught.

“We are going to be swamped,” says the businessman, who recalled life in Luang Prabang when the Americans were there. “With a population as small as ours, it will be almost impossible to stay afloat under such an invasion by the Chinese.”

Life in Laos has never been simple. After the defeat of the rightist forces in 1975, the country entered a deep freeze for 20 years as the victorious communists clamped down on individual freedoms.

“The situation has improved since the mid-1990s,” says the businessman. “Especially with the arrival of social media, the government has recognized that it can’t do much to stop the criticism, but if you are too outspoken they will still throw you in jail.”

When dealing with a giant China, as with America 50 years ago, being a small country appears to be a definite disadvantage.

Keith Loveard is an Indonesia-based journalist and analyst. He revisited Luang Prabang after a break of nearly 50 years.