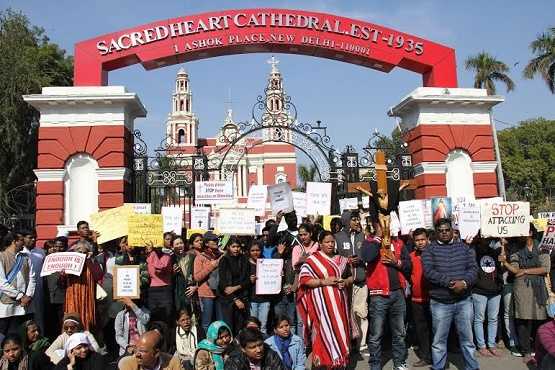 Some 12,000 Indian Christians experienced persecution in 2016 including murder, detention, assault, rape and harassment but the pro-Hindu federal government ignores the problem, says a new report.

The "Indian Christian Persecution 2016" report, released by the Mumbai-based Catholic Secular Forum, claimed that 10 people were killed and over 500 members of the clergy or community leaders were attacked for their faith in 2016. In other forms of persecution, 394 Christians were detained or arrested, 145 were beaten assaulted or manhandled and 34 nuns and Christian women were raped, molested or beaten.

Chhattisgarh state in central India was the scene of the worst persecution. A Catholic nun was raped in the state capital, Raipur in June 2016 and two Christians were murdered.

The state has long been ruled by the pro-Hindu, Bharatiya Janata Party (BJP) which also came to power to form the federal government in 2014. Pro-Hindu groups took the BJP victory as a mandate to step up their campaign to create a Hindu-only India, which resulted in increasing incidents of violence against Christians, said Catholic Secular Forum secretary Joseph Dias.

"The concern is not about the BJP's political gain but its silence. The BJP government has been silent on various fringe elements and right-wing forces acting against Christians," Dias said.

"The Christian community is not only negligible in terms of numbers but has no political clout; the majority are economically and socially poor too," he said.

Dias, who has been publishing the annual report for the past seven years, said the situation was worsening. "There is no hope for justice and no deterrent to control the fringe elements," he said.

Although India has some 27 million Christians they live dispersed among a vast nation of 1.2 billion people, forming just 2.3 percent of the population. In most northern states, they number less than a hundred people.

Published studies show some 70 percent of Indian Christians come from tribal, Dalit and other disadvantaged groups.

Most attacks on priests and community leaders have occurred due to accusations of attempting to convert Hindus to Christianity. Currently, Orissa, Madhya Pradesh, Gujarat, Chhattisgarh and Himachal Pradesh states have laws that criminalizes religious conversions.

On June 18, 2016, BJP parliamentarian Yogi Adityanath accused Mother Teresa of trying to "Christianize India" and called her social work a cover for proselytism. His views were supported by fellow BJP parliamentarian Subramanian Swamy who said their opinion was not "isolated."

Dias said the government's silence and apathy to restrain such hate speech encourages fringe elements to continue with anti-Christian attitudes and actions.

The report also highlighted the unemployment rate among Christians which was one of the highest in the country, according to the National Sample Survey Organization.

In February 2016, the official survey said that the unemployment rate among Christians was 4.5 percent in villages and 5.9 percent in cities, higher than in other communities.

The report also objected to the government's move to bring in a Uniform Civil Code to replace the religion-based personal codes that govern matters such as marriage and inheritance. The move violates constitutional rights "to freedom of religion" it said.

Overall, the government gives the "impression that the BJP would like to control minorities and their property or institutions by weakening the authority of [their] religious leadership," the report said.

The situation of religious minorities, especially the Christian community, has also been an issue of concern at the global level.

The U.S. Commission for International Religious Freedom has retained India among Tier-2 Countries on religious freedom since 2009. The country has risen to 15th on the World Watch List, up from number 31 four years ago.

The watchdog estimated that a church was burnt down or a cleric beaten, on average, 10 times a week in India in 2016, a threefold increase on the previous year.

However, Dias also blamed the Indian church for not taking a strong stand against atrocities. "The church has to serve as a catalyst not only to bring all the Christian groups, rites and denominations together but also to promote inter-religious dialogue. It has failed on this front," Dias added.