Visually impaired people say their employment rights are being ignored by 'deaf, dumb and blind' officials Visually impaired people protest in front of Punjab Assembly in Lahore on Oct. 16.They have been holding annual protests for the last seven years to demand job opportunities. (Photo: Kamran Chaudhry/UCA News)

In front of Punjab Assembly, decorated in lights and other cheerful adornments, more than 300 visually impaired people from across the Pakistani province are staging a sit-in.

Some are sprawled asleep on rugs, their heads resting on bags, while others sit against barricades put up by Lahore police. Youths gossip in small groups trying to find exam results announced by Punjab Education Board on their phones.

Wahad Ashraf, 21, passed this year’s grade 10 exams but his hopes for a bright career fade with each passing day.

“I become totally blind at night. It started at the age of four after a typhoid attack. We have jobless people with master’s degrees in this protest. I am not sure what to do after getting education or any skill,” he told UCA News.

“We may be blind but the government is deaf, dumb and blind. They don’t listen to our grievances. None of the government officials have visited us. We don’t have new clothes for Eid. People from other cities took loans to reach here. We shall remain on the road until the government employs or kills us.”

Ashraf and his group have camped in the commercial heart of Punjab’s capital since Oct. 12 demanding permanent jobs for visually impaired people. They have been holding annual protests in Lahore for the last seven years.

Last week the government announced that Oct. 19 would be a nationwide public holiday to celebrate Eid Milad-un-Nabi, Prophet Muhammad's birthday. However, the protest site became a center for dispute after traders from a nearby market attacked the protesters.

“About 70 traders pushed us away from the road and removed the barricades. Eight protesters were hospitalized. The police intervened and restored the barricades,” said Ashraf.

“This is both painful and shameful. Our society has lost its decency and humanity. We are locked in a shelter house after assurances.” 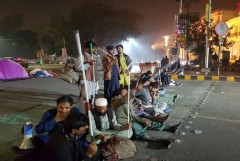 Similar protests have been held in other cities. Last week the Action Committee of Blind (ACB) in Khyber Pakhtunkhwa postponed its protest for a month after signing an agreement with the assistant commissioner of Peshawar, the capital of the northern province.

The agreement binds him to advertise a 2 percent job quota for visually impaired people and fill the sanctioned seats in government departments.

“Only the education department has implemented a 1.5 percent quota for the blind. More than 200 people will gather again at the provincial assembly in case the government forgets us again,” said ACB information secretary Isa Khan.

Last year Sindh High Court ordered the provincial government to ensure the implementation of a 5 percent job quota for disabled people. The court rejected the Sindh government’s report that it had awarded government jobs to 75 disabled applicants.

In 2019, their protest was called off after the deputy secretary of the social welfare department signed an agreement with protest organizers to employ 85 people as daily wagers and hire more than 500 in 35 days.

The state is not even acting like a stepmother. It only listens to those with political power and weapons. Annual agreements with visually impaired people are generally ignored

Ashraf joined his friends in sharing photocopies of the document with the media as a reminder to the state.

In 2014, both activists and leaders of opposition parties condemned Lahore police for baton-charging blind protesters marching towards the Chief Minister’s Secretariat.

In May, Pakistan’s government abolished the 2 percent public and private company employment quota for the disabled through a presidential ordinance. President Arif Alvi deleted section 459 of the Companies Act 2017 that ensured employment opportunities for disabled people. According to Alvi, the quota was deleted by chance.

Sabir Michael, a blind Dominican and assistant professor at the University of Karachi, awaits restoration of the federal quota for the disabled.

“The state is not even acting like a stepmother. It only listens to those with political power and weapons. Annual agreements with visually impaired people are generally ignored,” he told UCA News.

“Promises to the most vulnerable group are being broken in the state of Madina [welfare state] our Prime Minister Imran Khan usually trumpets. The height of insincerity is apparent on roads this Eid.”