Bill not in line with international standards on freedom of religion or belief, religious groups say 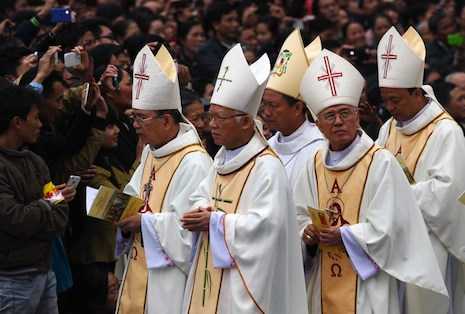 Vietnamese Catholic dignitaries march in a procession for a Mass on the occasion of a pastoral visit by Cardinal Fernando Filoni, prefect of the Congregation for the Evangelization of Peoples, in Hanoi, Jan. 20. (Photo: AFP)

What is religious freedom? This is the question posed in a video recently posted on Facebook, which includes interviews with members of the public as well as religious leaders, lawyers and activists.

Remarkably, the video was made in Vietnam, a country that continues to restrict freedom of expression and freedom of religion or belief.

The Association to Protect Freedom of Religion (APFOR), which produced the film, says it aims to help "everyone in Vietnam fulfill their right to freedom of religion … fighting any attempt to restrain or obstruct the exercise of this right."

It's a courageous and timely initiative: a new draft law on religion and belief is likely to be passed in Vietnam in 2016.

This will be the first such law in Vietnam, although there is already an Ordinance on Belief and Religion (2004), and Decree 92 (2013), which provides guidance on its implementation.

Decree 92 has been criticized by religious leaders and activists for its ambiguous terminology and bureaucratic obstacles, and for making registration a mandatory requirement.

Registration extends far beyond the simple recognition of a religious community: permission is needed for internal decisions such as the appointment of clergy, the planning of religious festivals, travel inside and outside the country, and setting the curriculum for religious training.

Unfortunately, the new draft law has adopted many of the problems and circular requirements found in Decree 92.

On a positive note, the government did invite religious communities to submit feedback on the fourth draft of the law in April 2015.

As another association video shows, most of the comments received have concerned registration.

Many religious groups also observe that the draft law is not in line with international standards on freedom of religion or belief.

A statement by independent Hoa Hao Buddhists says the registration system is a way to "screen out many beliefs or religions … and drive many of them into illegality."

Auxiliary Bishop Pierre Nguyen Van Vien of Vinh said: "The term 'recognized by the government' appears many times … as if government approval is a precondition for the government to respect citizens' freedom of religion. This is inappropriate."

Many of these concerns have been echoed by international human rights organizations. A joint statement by more than 35 civil society organizations calls on the Vietnamese government to revise the draft law to conform to international human rights law, in consultation with both recognized and independent religion or belief communities in Vietnam, and experts such as the U.N. Special Rapporteur on freedom of religion or belief Heiner Bielefeldt.

One activist trying to raise awareness of the issue inside Vietnam, who wishes to remain anonymous, says it is still difficult for citizens to speak up.

Registered religious organizations are in some ways more able to criticize the administrative burden brought about by the law, but are under pressure to make sure their comments do not antagonize the authorities.

Nonregistered groups have also spoken out, but their voices have largely gone unheard. In addition, some nonregistered organizations feel it is better to focus on reporting cases of religious persecution, ignoring the draft law altogether rather than putting their energies into a "hopeless" legal system.

In articles published on the law, state media have not included criticisms from either registered or nonregistered groups.

Despite these obstacles, some of the commentaries by religious groups appear to have had some effect.

The Hanoi-based daily Viet Nam Newsreported late last month that National Assembly deputy Khuc Thi Duyen had criticized a regulation in the draft law, which states that religious institutions can only be officially recognized if they have been in operation for at least 10 years. The measure could lead to "a restriction in the freedom to practice religion," Khuc told other lawmakers.

Several other deputies have also voiced the opinion that the law should "align the domestic legal framework with international conventions that Vietnam has joined." But others continue to demand more detailed regulations on banned religious practices, and calling for further prohibitions on abusing faith to undermine national unity, the kind of language criticized by religious organizations for being open to abuse.

It is difficult to see, at this point, which school of thought will have the most influence on the final version of the law.

Father Anthony Le Ngoc Thanh, APFOR's director of spiritual formation, believes there is no need for such a law.

"There should not be a specific legislation governing religion as we already have provisions in the civil, administrative and penal codes to address related matters," he says.

He adds that if a law must be introduced, it should be "for the purposes of guaranteeing citizens the right to freedom of religion and religious associations the right to practice their doctrines without interference, rather than assisting the state in controlling religious life. It should be remembered first and foremost that religious participation is a right, not a crime."

Bielefeldt has emphasized that the law presents an opportunity to introduce substantive revisions to strengthen freedom of religion or belief. But so far, the publicized drafts appear to inherit and solidify, rather than correct, many of these existing problems.

Nevertheless, it appears that there are those within the National Assembly who see a need to improve the protection of the right to freedom of religion or belief in Vietnam.

The next few months will be very important: divided opinion among government officials means there is still room for debate, making the work of religious leaders and activists to raise awareness of the law even more essential.