Little cause for optimism in China-Vatican relations

Appointment of Archbishop Parolin is not a miracle cure Archbishop Pietro Parolin drew the world’s attention as the media gave favorable coverage to his appointment as the Vatican’s new secretary of state.

Previously the under secretary for relations with states from 2002 to 2009, this distinguished diplomat led the Holy See’s negotiations with China, Israel and Vietnam. However, his name had been unknown to most Chinese Catholics.

Upon taking up his new post, only second to the pope in the Roman Curia, what kind of changes will Archbishop Parolin bring to China-Vatican relations?

Some Church people in China are optimistically expecting relations will be improved. But I foresee a rather long period of stalemate.

Why? Let’s start with the year 2000 when there were hopes for diplomatic ties. Each time diplomatic ties seemed close, bishop ordinations unapproved by the Vatican took place, prompting condemnations from the Holy See. Negotiations then stalled.

Why did the government-sanctioned Chinese Catholic Patriotic Association (CCPA) dare to arrange illegitimate ordinations at those critical moments? It should go without saying that these were deliberate acts of sabotage, orchestrated by the government.

China is not in a hurry to establish ties with this tiny European state. When the Vatican offers her olive branch, China rejects it tactfully so as to protect her international image.

It therefore allowed the CCPA to concoct this farce leading to the Vatican’s condemnation. The Beijing government could then accuse the Vatican of “intervening in China’s internal affairs,” blaming her for disrupting negotiations.

Why doesn’t China want to normalize relations with the Vatican now?

It’s perhaps better to view this problem from another angle: What would China gain from normal relations at this point? 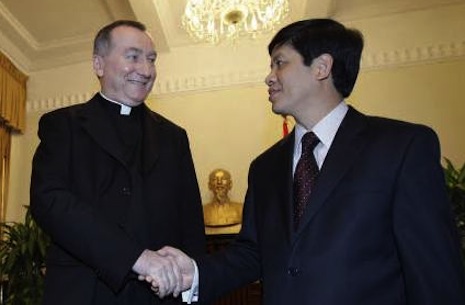 Parolin a telling choice as Pope Francis' No 2 The key point is that Beijing sees international relations in terms of political value and Vatican ties offer neither military nor economic benefits.

Several decades ago, China could have used diplomatic ties with the Vatican to boost its international status and image. But today, such a relationship is of minor importance. China has already risen to become a world power.

The huge Chinese market of more than 1.3 billion remains an irresistible charm to the world, especially following the devastating global financial crisis when many economies were posting recessions while China was recording GDP growth well above seven percent. What does that mean?

The most powerful tool the United States had 20 years ago to pin China down was trade benefits granted under Most Favored Nation Status. China needed it then, but in recent years when have we heard similar tactics being used to check the world’s second-largest economy after the US?

It is no exaggeration to say that a country must secure sufficient resources before it can take China to task. China has many friends around the globe, many of them forged through trade and investment.

China has no urgent need for friendship with the Vatican, and does not care if anybody criticizes her now. Establishing ties with the Vatican would affect the dynamic between China and Taiwan as Beijing continues to demand that the Vatican ends ties with Taipei.

China and Taiwan have in recent years ended their cold war and agreed not to disturb each other’s diplomatic relations. The importance of Vatican relations pales in comparison.

The Vatican would see diplomacy with China as the key to evangelization in the most populated country on the planet, drawing more Chinese to Jesus Christ and his Gospel. And China would gain nothing from this move.

It is not the arrival of a new pope or secretary of state that could speed up negotiations. Still, let’s be cautious while remaining optimistic – surely one day China will be under God’s reign.