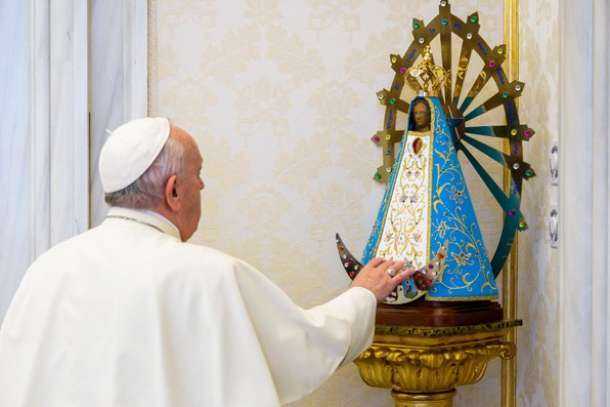 Pope Francis touches a statuette of Our Lady of Lujan at his weekly private audience in the Vatican on Dec. 2. (Photo: AFP)

While sin may distort and disfigure the image of Christ that every person bears, it does not completely erase it, nor does it remove people from God's abundant mercy, Pope Francis said.

At his weekly general audience Dec. 2, the pope said that even when a sinner remains "in error for a long time," God waits patiently, "hoping that the sinner's heart will eventually open and change."

"God is like a good father and a good mother: They never stop loving their child, no matter what he or she may have done wrong," the pope said during the audience, which was livestreamed from the library of the Apostolic Palace.

While continuing his series of talks on prayer, Pope Francis also offered prayers for the victims of a terrorist attack Nov. 28 in Nigeria; 43 farmers near the northeastern city of Maiduguri were brutally murdered.

According to BBC News, no one has claimed responsibility. However, it is believed that either Boko Haram or the Islamic State West Africa terrorist organizations, both active in the area, were responsible.

Remembering the victims, the pope prayed that God would "welcome them in his peace and comfort their families and convert the hearts of those who commit such horrors, which seriously offend his name."

In his main talk, the pope reflected on blessings, which, he said, are "an essential dimension of prayer."

Noting that there is a "continual repetition of blessings" in the first pages of the Bible, the pope said that both God and humankind give blessings, and that a blessing "possesses a special power that accompanies the person who receives it throughout his or her entire life and disposes the person's heart to allow God to change it."

Even though sin "altered" the beauty of God's creation and converted the human being into "a degenerate creature capable of spreading evil and death in the world," it did not take away the inherent goodness embedded in each person, he said.

God did not make a mistake creating the world or people, he said.

"The hope of the world lies entirely in God's blessing: He continues to desire our good; he is the first, as the poet Peguy said, to continue to hope for our good," the pope said, citing the French poet Charles Peguy, whose works were heavily influenced by Catholicism.

Departing from his prepared remarks, Pope Francis drew a comparison between God's love for all and the love of countless mothers who wait in long lines to visit their children in prison.

"They do not stop loving their children, and they know that the people who pass by in the bus are thinking, 'Ah, that is the mother of that prisoner,'" he said. "Yet they are not ashamed of this, or rather, they are ashamed, but they keep going because their child is more important than shame."

"Thus, for God, we are more important than all the sins we can commit because he is a father, he is a mother, he is pure love, he has blessed us forever. And he will never stop blessing us," the pope said.