Light in darkness and hope in despair

An Advent clarion call to all in Myanmar: Invest in hope and peace based on justice 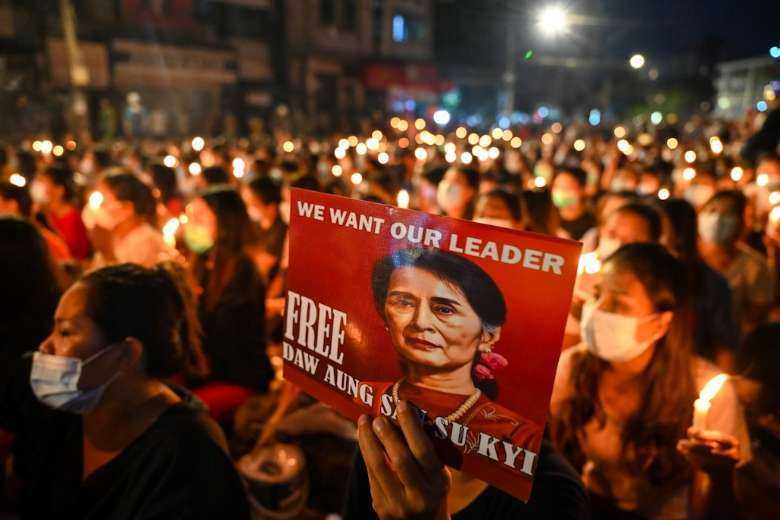 A protester holds a poster of detained Myanmar civilian leader Aung San Suu Kyi during a candlelight vigil in Yangon on March 13 to honor those who have died during demonstrations against the military coup. Myanmar's junta on Dec. 6 jailed Suu Kyi for four years for incitement and breaching Covid rules. (Photo: AFP)

Dear brothers and sisters of Myanmar,

Greetings of peace. This message comes as we sail through another hope-filled Advent, a season waiting for the Prince of Peace, Jesus. It is the season of peace. It urges us to invest in hope.

We live in challenging times. The Prophet Isaiah has a memorable sentence which reflects our condition: The people walking in darkness have seen a great light; On those living in the land of the shadow of death, a light has dawned. (Is. 9:2)

Where is that land of the shadow of death? Every Myanmar heart will say with great sorrow: This is our land. Land on which darkness has fallen, a land where violent death has become the norm. This is the valley of tears. The repugnant violence over the last 10 months has offended the sensibilities of the world. Yet we do not accept the evil of despair and hate. With Jesus we wish to proclaim: Let there be peace. To the nation of self-inflicted wounds, we say: Enough is enough, my dear Myanmar.

How do we explain events like where the poor were getting treatment for Covid and conflict-related wounds? Violence raged. We do not ever condone the injustice and suffering of the innocents. Those expected to guard the life and security of our people have become a frightening cause of distress and dread. Even to them, we say: There is power in love. That is the message of Jesus and Christmas.

Our heart-wrenching memories tell us that just a year ago this country held lofty dreams in her heart. Sadly, it convoluted into a nightmare so soon. This land was a Garden of Eden: beautiful, resilient, envied by so many nations for her resources, for the colorful people who lived with great joy, songs and sharing.

How did this Garden of Eden mutate into the expanded Way of the Cross? Into the valley of tears? The conditions in Myanmar remind us of the warning of Jesus of the apocalyptic times (Luke 21:5-11): You hear of wars and uprisings. Nation will rise against nation, and kingdom against kingdom. There will be great earthquakes, famines and pestilences in various places, and fearful events.

Mahatma Gandhi had sobering advice for all tossed by inhuman violence. Non-violence is not for the weak-hearted. It is the weapon of the strong

Enough is enough, my dear Myanmar. Christmas is the moment of introspection: for those who believe only in violence, those who perpetrate it and those who fall victims. Those who proactively started the violence and believe in the sadistic torture and killing are the primary cause of this valley of tears.

I am deeply concerned about our youth. Just a year ago they had their dreams. Dreams are not killed by guns. Strangled by inhuman violence, the temptation is to seek vengeance. Victory does not come through only holding guns. Hold the truth; hold love. There is always a non-violent path, a peaceful solution.

Once again, I appeal not to follow the path of violence. Violence only breeds violence. Change course. Believe in truth; belief in the power of love. Mahatma Gandhi had sobering advice for all tossed by inhuman violence. Non-violence is not for the weak-hearted. It is the weapon of the strong.

A coward is incapable of exhibiting love; it is the prerogative of the brave. Many people, especially ignorant people, want to punish you for speaking the truth, for being correct, for being you. Never apologize for being correct.

Truth, the Bible says, liberates us. These are times when the truth is fragmented; it is easy to fill our minds with narratives of hatred and prejudice. Faith in one another may be polluted and disunity destroys us.

We also need to be on guard against wanton violence; the killing of our own countrymen, people who differ from us. Young people of this country, I know your pain, but that pain cannot be justified by inflicting more pain on yourselves or others.

As Christians, we seek guidance in the Word of God and the inspiration of the Holy Spirit.  Christ is our leader. His birth, his life and his message of hope need to guide us. The Advent tells us that Christ appeared in a similar context of chaos and hatred. He was a victim of the arrogance of the Roman Empire. Death and massacres were the norms when he was a child. Genocide of the children happened when Herod chose to kill all the children. Jesus was displaced. He was a refugee. Herod failed; Pilate failed.

Yet the Love Incarnate, in that simple manger, born to poor like our people, won over. The manger of Bethlehem ultimately won over the might of Rome. Let that be our hope. Amidst the darkness and the suffocating despair, over the poor manger angels sang a song of peace when he was born.

Yes, peace. The message of Christmas is peace. Pope Francis consistently speaks for the people of Myanmar. During his visit, he chose to meet everyone just for the cause of peace. He left the mandate of peacemaking to the Myanmar Church. This appeal continues his appeal. Let us seek peace and reconciliation. Let us knock at every door, let us knock at the powers. History is on our side. Seeking a peaceful method is not diluting any rights. The Catholic Church’s concept of peace starts with the quest for justice. Not an empty peace but peace born out of justice. There can be no durable peace without justice in this country.

Jesus, who preached that “blessed are the peacemakers” in the Sermon on the Mount, also said that "blessed are those who hunger and thirst for justice." Yes, two to three million of our people are hungry for food, but all the people of Myanmar are hungry for justice. Until that hunger is satisfied, this country will not settle into peace.

Our conflicts were never against a cross-border enemy. All were against our people. We can solve our differences

Let us accept that the collective goodness in our hearts is more powerful than fragmented hatred. We learn from many countries in Southeast Asia like Cambodia, Vietnam and Laos that suspended conflict and started developing their countries. We are endowed with resources above and below the ground.

As Christians, we seek God, his guidance, his protection. We understand Christ’s leadership is for service. We see that Jesus, despite being God, emptied himself and took the form of a slave. He preached peace and reconciliation even from the Cross.

In this Advent season, we pray for all, especially the young people. We pray that they continue to nurture hope and peace. Let them not seek solutions out of despair. We also pray for those who seek to dominate our people with guns. Our conflicts were never against a cross-border enemy. All were against our people. We can solve our differences.

Real Christmas is when this country believes in peaceful means. Let the prophecy of Isiah, prominently displayed in the UN building, become our reality from this Advent season: They shall beat their swords into ploughshares and their spears into pruning hooks; Nation shall not lift sword against nation, neither shall they learn war anymore. (Is. 2:4)

* Cardinal Charles Maung Bo is the archbishop of Yangon and president of the Catholic Bishops’ Conference of Myanmar. The views expressed in this article are those of the author and do not necessarily reflect the official editorial position of UCA News.

RANJIT YAWU
I have put my Spirit upon him, he, Emmanuel, the God with us, will bring forth JUSTICE to Myanmar, Afghanistan, Sri Lanka & other nations in strife. He will not cry or lift up his voice, a bruised reed he will not break, and a dimly burning wick he will not quench; he will faithfully bring forth JUSTICE –Isaiah 4:1a-3. Faith is the assurance of JUSTICE, hoped for, the conviction of JUSTICE unseen – Hebrews 11:1
Reply