Former 'untouchables' and Muslims suffer more attacks from Hindus, seen as backlash against battle for their rights 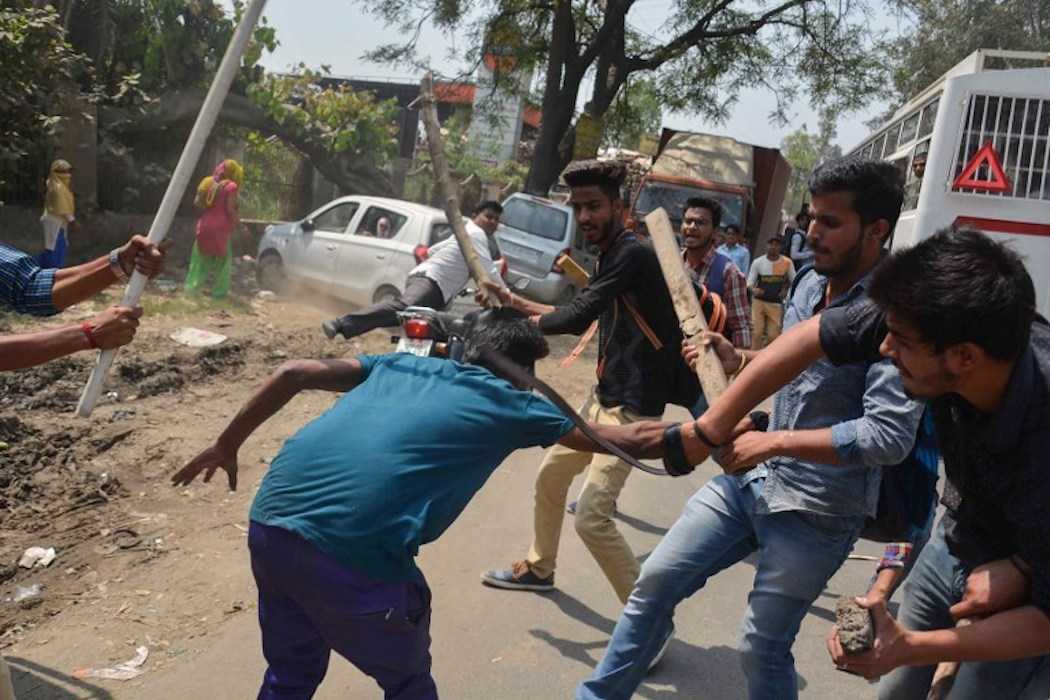 A protester is beaten by Indian students after members of the Dalit community and other 'low caste' groups threw bricks at their college, during countrywide protests against a Supreme Court order that allegedly diluted the Scheduled Castes and Scheduled Tribes (Prevention of Atrocities) Act, in Meerut in Uttar Pradesh state on April 2. (Photo by Meerut/AFP)

The upper-caste hegemony at the expense of impoverished or "second-class" social groups continues unabated in Hindu-majority India, with lynching still a danger for ethnic or lower-caste groups.

Meanwhile, another two men from poor Dalit castes — dubbed "untouchables" due to their low social status — were beaten to death in separate incidents in May.

Analysts see echoes in these incidents of the re-emergence of a broader trend whereby higher castes mistakenly believe they have the inalienable right to dish out vigilante justice to people on lower rungs of the social ladder.

The worrying plight of the Dalit people has worsened since the pro-Hindu Bharatiya Janata Party (BJP) swept to power in 2014, said rights activist Prashant Dubey.

He said upper-caste Hindus believe the country belongs to them and that others must adhere to their caste-based values.

Crime data released by the government, as well as violent attacks such as those just mentioned, appears to lend some credibility to his argument.

Mukesh Vaniya, a 35-year-old rag collector, was flogged to death by five people — a factory owner and his friends — on May 20 in Rajkot district of Gujarat state on suspicion that the victim and his wife were stealing scrap from the factory compound.

In another incident, the battered body of 21-year-old Pradip Kalubhai Rathod was found outside his home in Timbi village in Bhavnagar district of the same state on March 29.

Reports claimed he was killed for the "crime" of daring to ride a horse.

Then there is the case of Ranjit Thakor, another native of the same state who was attacked and forced to shave off his mustache simply for adopting the name "Sinh," traditionally an upper-caste name.

On top of these cases are other examples of vigilantism in response to perceived abuses of cows, which are revered animals in Hinduism.

Four men attacked and killed a 45-year-old Muslim man and severely injured his friend on May 17, accusing them of slaughtering a cow in Satna district of Madhya Pradesh. Police have since arrested four people, according to local reports.

A crime every 15 minutes

Upper castes have been meting out their own brand of vigilante justice to Dalit people for centuries but it has assumed dangerous proportions in recent times as a crime was committed against a Dalit every 15 minutes on average in 2016, official records show.

Worse still, two Dalits were murdered on average every single day of that year as police records show there were 786 homicides perpetrated against them.

Other common crimes include arson, rape, riots, kidnappings and the sexual harassment of women, the crime report said.

Meanwhile, federal records show that only 73 percent of those cases went to court and only about one in four were successful with the final conviction rate standing at 27.2 percent.

These crimes continue "as the governments are not taking stern action against criminals. It is a shame," said Bishop Sarat Chandra Nayak, who heads the Indian Bishops' Commission for lower-caste people.

According to Bishop Nayak, such incidents spiked after the Supreme Court watered down a stringent law meant to protect the rights of people of lower castes and indigenous communities, who together form 25 percent of India's 1.2-billion population.

In one case, court-issued guidelines on March 20 stopped police from immediately arresting a suspect after a Dalit filed a complaint with sufficient grounds for investigation.

The new rules mandate that public servants can only be arrested after police have received written permission from their appointing authority.

In the case of employees at private companies, the complainant must obtain permission from the senior superintendent of the local police force.

Social activists like Dubey say the court's move is in line with the government's attitude, which is seen as favoring upper-caste Hindus and promoting their rights, culture and social values.

Dubey said that Indian President Ram Nath Kovind's refusal to comment on such issues is even more concerning as he also hails from a Dalit community.

Prime Minister Narendra Modi also claims to come from a "backward" community but does little to protect the rights of minority groups, he added.

The violence against Dalit people is "nothing new," according to Bishop Jose Chittooparambil of Rajkot Diocese.

"In a way, it is a continuation of the kind of discrimination that has been going on for centuries," he said.

The Dalits were once considered untouchable and outside India's four-tier caste system. Although that system has since been outlawed, it lives on in the collective social psyche, the bishop said.

The Dalits, who until recently were only allowed to perform menial jobs such as cleaning roads, toilets and removing dead animals, were at the bottom of the ladder and granted few if any basic human rights.

It was even considered an offence for them to try and speak to a member of a higher caste or, shockingly, allow one to literally fall under their shadow when the sun was out, Bishop Chittooparambil said.

"Now we are seeing those same kind of social values and caste principles gaining momentum once more," he said.

The prelate recalled that in June 2016 four members of a Dalit family were publicly flogged by a group of Hindu vigilantes for skinning a dead cow in a town in Gujarat's Gir Somnath district, his diocesan area.

Sarvaiya Vasram, one of the four men who received a whipping that day, told ucanews.com they "have since left the hide business and quit the oppressive Hindu religion to become Buddhists."

"We have also begun educating our fellow Dalits to stand up for their rights rather than suffering in silence," he added.

One reason for the recent spike in the number of attacks could be that the Dalits are making greater efforts to assert their rights, said Asif Shaikh, an activist who works to end manual scavenging.

These attacks are also related to the poverty of the Dalits, who are "available to work for peanuts" on the farms of upper-caste people, Shaikh said.

Conflicts arise when they ask to be paid at least the minimum wage in a bid to resist exploitation, he added.

Bishop Chittooparambil said the church will keep encouraging oppressed groups to unite and fight for their rights.

"There is strength in unity," he said. "One day these kinds of attacks will be a thing of past."