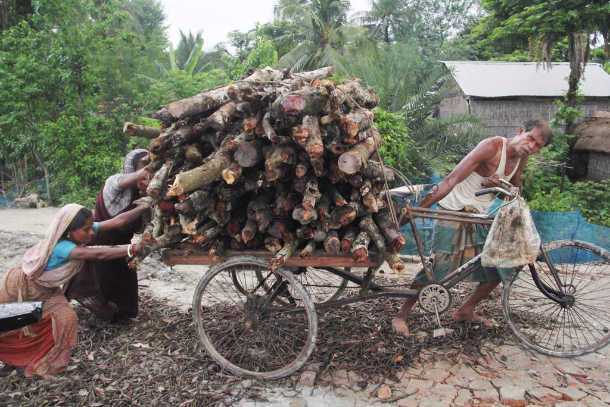 Poor day laborers push a cart full of wood in Satkhira district of Bangladesh in this file photo taken July 2015. Bangladeshi activists say that despite the fall in the poverty rate poor people are getting poorer amid income disparity and social inequality. (Photo by Stephan Uttom/ucanews.com)

Since he was a child, Raju Bor, 18, an ethnic Singh and Hindu, has seen his poor day laborer parents struggle to maintain their five-member family in Belowa village in Bangladesh's Natore district.

Raju, the second of three sons, dropped out of school after grade five because his parents could no longer afford his education. His brothers also had to abandon school for the same reason.

"We have no cultivable land except for our homestead, so my parents had to rely on low-paying day labor for a living. It was very difficult for our parents to run the family," Raju recalled.

The family's plight got worse when their mother passed away after suffering from an unidentified disease a few years ago.

After wandering aimlessly for years, Raju's elder brother found a job in a grocery as a salesman and started helping the family.

"Like my elder brother, I wanted to help the family but I didn't know what I could do. It made me frustrated," Raju told ucanews.com.

"I enrolled for six months of training in petrol and diesel engine servicing. After completing the course, I have a found job in a local mechanical workshop last year," he said.

Today Raju earns about 4,000 taka (US$48) a month and he is glad to help in lessening the bite of poverty on the family. "I am confident that our life will be happier and dignified in the future," he said.

Raju and his family are among an estimated 10.5 million people to have come out of extreme poverty in Bangladesh in the past eight years.

The poverty rate has fallen from 31 percent in 2010 to 21.8 percent in 2018, according to the latest data from the state-run Bangladesh Bureau of Statistics. The analysis is based on people's capacity to buy food, not on per capita income.

Current per capita annual income stands at US$1,751 and gross domestic product (GDP) growth reached 7.86 percent this year, according to a Ministry of Planning briefing in September. Slum dwellers seen at a shanty town in central Dhaka on Oct. 15, 2015. Bangladesh has seen a remarkable drop in its poverty rate but activists say income disparity and social inequality are on the rise. (Photo by Stephan Uttom/ucanews.com)

Still millions below the poverty line

Hollam Mollah, 55, is a Muslim slum dweller near Tejgaon railway station in the central part of Bangladeshi capital Dhaka.

About 10 years ago, Hollam moved to Dhaka with his wife Sharifa Begum and two sons after devastating river erosion swept away their house and arable land in their home district of Manikganj in central Bangladesh.

Both their sons have married and live separately with their wives, leaving their parents behind to fend for themselves.

Hollam runs a small stall selling tea and cigarettes near the railway station and makes 300-400 taka a day. Sharifa, now 45, helps her husband in the business. The couple live in a one-room abode with a tin roof.

Life in Dhaka is constantly challenging for Hollam and Sharifa.

"The slum is illegal, so time and again police come and evict people. We move out and come back to restart life when the police have gone. To run this shop I must pay money to extortionists or they might break it down," Hollam told ucanews.com.

"At the end of the month, we can barely save anything."

Sharifa says if they can save enough money, they would buy a piece of land in their village and resettle there.

"We can hardly keep our body and soul together in the city. There is no peace and happiness. We believe we can have a peaceful life if we can ever get back to our village again," she said.

The drop in the poverty rate is hardly reflected in the real life of poor and marginalized communities, says Jibon Das, regional director of Caritas Khulna, which covers the poor southern coastal area of Bangladesh.

"Poverty is falling but the number of people hoarding mass wealth is rising and the gap between the rich and poor is also increasing. The benefits of poverty reduction don't reach out to those in need, while people with political and government connections have the blessings of economic growth and prosperity," Das told ucanews.com.

Das pointed to Bangladesh's poor standing in a recent global ranking assessing efforts to eradicate inequality. The nation was ranked 148th among 157 countries in in the Commitment to Reducing Inequality Index 2018.

"The rich are getting richer and the poor becoming poorer, and there is no stopping it unless we can ensure good governance, equality-based distribution of wealth and bring an end to corruption," Das said.

A nation cannot have a real picture of poverty by only assessing food purchase capacity, says Anu Muhammad, a prominent economist and rights activist.

"Poverty is a multifaced problem, so we cannot define and examine levels of poverty without considering related aspects. For example, those who can purchase 2,200 calories of food items a day have to spend more money than their income and often they borrow from other sources. That means actual poverty is even more grave and there is no balance between income and purchase capacity," Muhammad, professor of economics at Jahangir Nagar University in Dhaka, told ucanews.com.

Poverty might have fallen on paper but inequality has risen fourfold in the past decade, he said.

But Samsul Alam, a senior secretary with the Ministry of Planning, said Bangladesh has made laudable gains in poverty eradication.

"Bangladesh has made remarkable progress in eradication of poverty. It is true that income disparity and social inequality have not fallen as expected. The government is committed to integral development and there is a priority to increase spending in social security sectors including health services and also to raise wages of workers in various sectors," Alam told ucanews.com.