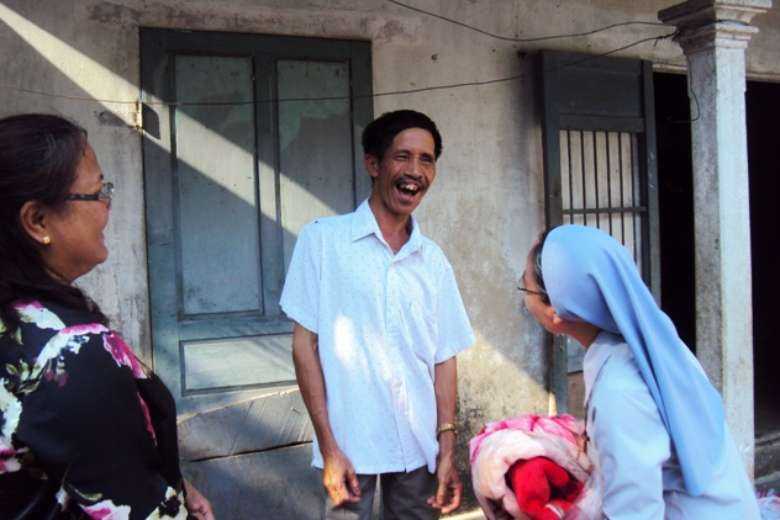 A man gives a cheerful smile to Catholic visitors in Hue. Every person in the world conveys a vital message to each of us. (Photo: UCA News)

His name is Hoa, which is the same as mine. He is 10 years older than me. He is tall and thin and his face is smeared with dust. He always has happy smiles and greets people with bright smiles. His smile makes anyone who meets him, even once, remember it forever.

Born and raised in Thanh Liem district of Vietnam's Ha Nam province, he had a pretty good childhood. His peers say that he performed miracles at school in the past, but a bad bout of typhoid made him show eccentric behavior. He seems to communicate with other people only with smiles, not with language.

He is regarded as abnormal because he has eccentric actions. For some reason, he hates papaya trees. Every time he sees a papaya tree, he manages to cut it down. Maybe it is something that once hurt him, so he becomes like that.

He brings home all kinds of things he collects and his house is always messy. Sometimes he brings home blankets of the dead. Nuns visit him and help clean and tidy his house, but later he goes to their convent and asks them to return his things.

He makes a living by collecting old tires from streets and keeps his money in his house. One of his neighbors is a young man who was addicted to drugs and stole all his money. However, he said nothing, did not insult or curse the thief, but just laughed.

His neighbor died but he is still alive and well. When we ordinary people lose our money, how do we react?

While so many people are quite frantic with worries about all things in life, the smiling man has nothing to get in a sweat over. He could sleep well anywhere and many times is caught sleeping under bridges

It seems that he never gets sick. He has not caught Covid-19 during the prolonged pandemic even though he never wears a mask. He is also not afraid of the contagion at all and lives a laid-back life. Could we ordinary people lead a peaceful life like him or have a terrible scare over the pandemic?

He lives by his work and never begs anyone for help. Some people give him money, but he declines to take it. In some cases, he receives food and drink from those who kindly offer him.

I see that he keeps his great dignity and self-respect in the circumstances. Do we still preserve our confidence and self-esteem?

While so many people are quite frantic with worries about all things in life, the smiling man has nothing to get in a sweat over. He could sleep well anywhere and many times is caught sleeping under bridges. Truly, as Psalm 4:8 says, "In peace I will lie down and fall asleep." Do we have sound sleep?

He lives with his elderly mother. When she was weak and tired, his biological aunt took her home to tend since she feared that he would not be able to take good care of his mother.

His mother died a week later. He told his aunt that "I thought you took care of my mother to live but in the end she died." The word of the man who is considered naive contains a rather philosophical meaning.

He was not at his mother's funeral and no one knew where he was. Two days later he returned home and wanted to disinter her grave to bring her back. How great his love for his mother is. Do we love our mothers as much as he does?

Somewhere in this world, God is still speaking to us through particular people to awaken us, but our souls are too callous to be sensitive enough to realize them

I used to watch a video clip about a young man playing the guitar. His name is Tran Thuan, from Ha Tinh province. He sang the song "I am at the beginning of the river; you are at the end of the river". He neither sang nor played the guitar as well as professors, but listeners still felt captivated by his wholehearted performance.

Listening to him play the guitar and sing, I felt as if time stopped and something touched my soul. I am particularly impressed by a viewer who commented: “When I first heard him play and sing, I thought he had strange feelings. When I heard the middle part, I saw that he was normal and I was not. And when I heard the last part, I felt that the whole world was abnormal, only he was normal."

Somewhere in this world, God is still speaking to us through particular people to awaken us, but our souls are too callous to be sensitive enough to realize them.

I always believe that every person born into this world is not unreasonable as their existence and life must convey a vital message to each of us.

The stories above should also be enough for us to contemplate seriously. Let us take quiet moments to arouse our conscience about how to enjoy life to the fullest so that our lives must always be filled with happy laughter. In doing so, we are worthy of normal people.

* Father Joseph Ta Xuan Hoa is from Hanoi Archdiocese. The views expressed in this article are those of the author and do not necessarily reflect the official editorial position of UCA News. This article was summarized and translated by a UCA News reporter from a Vietnamese article published by tonggiaophanhanoi.org here.