Nadine Gires in Nakhon Si Thammarat, where she now runs a hotel by Khanom beach, as she speaks about her involvement in the investigation of the murders of tourists by French serial killer Charles Sobhraj, now the subject of the television drama serial 'The Serpent'. (Photo: AFP)

Violent crime targeted by disgruntled locals at family members and acquaintances has been claiming victim after victim in southern Thai provinces notorious for hair-trigger tempers and rampant gun violence.

In one recent incident in the southern province of Nakhon Si Thammarat, which has been dubbed “the murder capital of Thailand,” the assistant head of a village shot dead his two-year-old daughter on Nov. 16 during a heated, drunken quarrel with his 27-year-old wife.

The man, who took umbrage at his wife for berating him for getting visibly drunk at home, reached for his gun and took a shot at his wife but missed. He then shot his daughter, killing the toddler instantly.

The villager then tried to commit suicide by shooting himself in the head but survived with a severe head wound, according to police.

The day before, a 60-year-old man in the southern province of Songkhla, which borders Nakhon Si Thammarat, shot his 88-year-old father dead following a quarrel in an incident that was recorded on a home surveillance camera. The man tried to flee but was arrested by police.

Gun violence has long been a serious problem in Thailand, especially in the South, with a per capita murder rate that is higher than that in the United States, according to experts.

Today people believe the ownership of guns conveys a sense of wielding power. A firearm is also a sign of authority and control, a sign you are not afraid of anything

In Nakhon Si Thammarat, which has a population of some 1.5 million, scores of locals have been shot dead this year alone and many more are likely to die before the year is out.

“If we let the crimes go unchecked, we might see 100 murders by the end of the year,” Police Colonel Wirachan Khunchaikaew, superintendent of the regional Crime Suppression Subdivision, said back in August by when 55 locals had been shot dead, mostly during heated disputes.

Criminologists and other experts have been warning that the large number of legally and illegally owned firearms in Thailand and lax enforcement measures mean that the rate of gun violence will remain high.

“Thailand’s gun laws are outdated. Currently, a person as young as 20 years old can [legally] own a gun and have a lifelong gun license. There are loopholes in the system of registering, buying and selling guns,” said Piyaporn Tunneekul, a criminologist who is an associate professor at Rajabhat University. 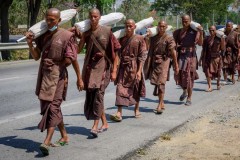 “The concept of owning a gun for a Thai in the past was for the purpose of protection. Now that mindset has changed. Today people believe the ownership of guns conveys a sense of wielding power. A firearm is also a sign of authority and control, a sign you are not afraid of anything,” Piyaporn explained.

The problem is especially acute in Nakhon Si Thammarat and other southern provinces where many own guns, often illegally, and carry their firearms with them for self-defense in case an argument with someone might escalate into violence as tempers flare.

“Many young men are especially dangerous in my hometown. They like looking for trouble and can kill someone just for looking at them the wrong way,” Suwisa Sukchuang, a native of Nakhon Si Thammarat who now lives in Bangkok, told UCA News.

“When I go back home, I never go out after dark because I don’t feel safe,” Suwisa said, adding that her family also owned a handgun as a safety precaution.

A few years ago a villager who had become involved in an argument with her father over an alleged slight showed up at their house one day after dark, threatening to kill him. The villager backed off his plan of seeking murderous revenge only after police were called on him, Suwisa said.

Even relatively innocuous disagreements can escalate and result in murder or attempted murder in the southern province.

Earlier this year a 73-year-old man gunned down a guest at a funeral in Nakhon Si Thammarat for not wearing a face mask.

The elderly man told police he had shot dead his victim, a 50-year-old acquaintance, during a heated argument that erupted when he began berating the younger man for not wearing a mask despite a nationwide rule that requires all people to wear masks outdoors during the pandemic.

Eyewitnesses told police that as the elderly man was about to drive off on his motorcycle the younger man began taunting the septuagenarian by saying: “I know you’re carrying a gun, but you’re too chicken to shoot.”

In response the elderly man then pulled out his handgun and shot his disputant in the face, killing him on the spot.