Life in the LGBT shadows in Vietnam

Nuns help vulnerable people who face discrimination because of their sexuality 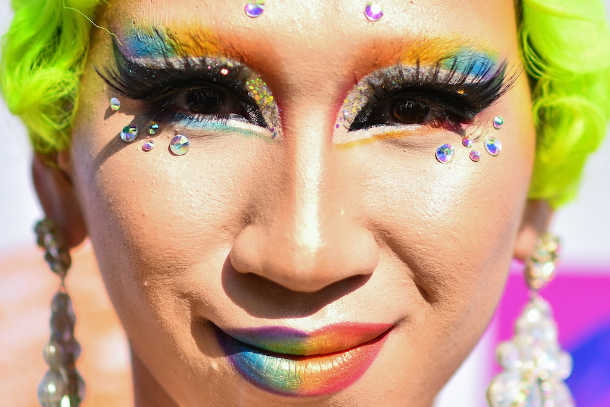 A participant in the Hanoi Pride parade, which champions LGBT rights in Vietnam, on Sept. 22, 2019. (Photo: Manan Vatsyayana/AFP)

“I have a duty to protect them from HIV/AIDS and sexually transmitted diseases because they can easily catch the highly contagious diseases,” Nhat said, adding that they keep their private lives behind closed doors and fear gender discrimination from their neighbors.

The 28-year-old gay from Huong Phu district of Thua Thien Hue province has felt inclined to become a girl since he was a child. In 2009, he dropped out of school to avoid his classmates’ bullying, left home and sought jobs in Hue city as he did not want to work on farms.

He works at a coffee shop and chooses to use a female name. He started to live with his boyfriend and found himself infected with AIDS in 2016.

“I dare not tell my parents about my deadly disease and gay condition because they will be sad and disappointed in me,” he said.

He is their only son and is traditionally expected to maintain their family line in Vietnam’s patriarchal society. “Now I try to keep my health well as a way to please them,” said Nhat, who has two sisters.

He has attended courses in communication and healthcare skills for people with HIV/AIDS. The free courses have been held on the third Sunday of every month by Daughters of Mary of the Immaculate Conception sisters since late 2018.

Despite being a man with a female voice, the nuns treat him like a normal person, offer him medical treatment and teach him how to reduce gender discrimination among communities.

Lesbian Ho Thi My Le said her father angrily shouted at her and gave her up after he learned of her homosexuality when she was 16.

Le, who has two siblings, left home in Quang Tri province and worked at markets and small restaurants in Binh Duong province after her mother died in 1996.

The 42-year-old woman lived with a lesbian and both worked at beer houses for a living and abused drugs. She was infected with HIV from her same-sex partner in 2000 and her father took her home.

“Before his death in 2010, my father reconciled himself to my gender and told me that if he accepted my gender, my life would be better,” Le said.

Le, who works at construction sites and earns 170,000 dong (US$7) per day, said she has joined a love club for LGBT (lesbian, gay, bisexual and transgender) individuals and HIV/AIDS patients founded by the sisters.

“The nuns love, sympathize and offer 50 club members money so that they can have small businesses, raise cattle and poultry and repair their houses,” she said.

Club members meet and share their difficulties, sorrows and joys each month. They are also given useful skills to look after themselves and others.

“I find myself happy again and can do helpful things for other people in need. That is thanks to the nuns,” Le said. People take part in a discussion at an LGBT workshop held by nuns in Hue on May 10. (Photo: UCA News)

Nhat and Le were among 120 LGBT people, HIV/AIDS patients and health givers who attended a workshop titled “Don’t Discriminate Against LGBT” held on May 10 and 17 in Hue by the nuns. Most participants were from other faiths.

Sister Anna Nguyen Thi Hien, head of Kim Long Charity Clinic, said the workshop aimed to provide basic knowledge on the characteristics of homosexuality, bisexuality and asexuality and the meanings of sexuality.

“It is an opportunity to unite those vulnerable people to overcome discrimination and integrate themselves into society,” Sister Hien said. “The Church rejects LBGT people’s marriage but loves, respects and journeys with the LGBT community who are also God’s children.”

Participants also shared their mental and emotional pain with one another and learned how to heal themselves and protect themselves from HIV/AIDS.

Michael Tran Chanh Hung, a volunteer from Hai Lang district, said the workshop helped bring volunteers to vulnerable people. “We have to help them live an active life and integrate into society,” he said.

Truong Thi Nhung, a participant, said she used to treat LGBT people as strangers and avoided meeting them.

“After the workshop, I understand their characters and respect their gender differences,” Nhung, 43, said. “We should work together to fight against gender discrimination among communities and to protect LGBT people.”