If nurses leave, many hospitals will be forced to close, says archbishop 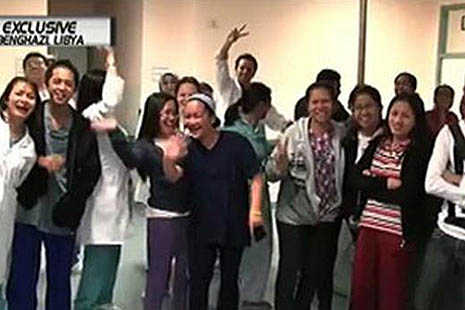 Filipino medical workers who decided to stay in Libya despite the war are considered "heroes" by the Libyan people, a Filipino Catholic priest reported. "The decision of Filipino nurses and medical workers to stay and serve their patients has earned the respect of many Libyans," said Father Allan Arcebuche, assistant parish priest of San Francesco Catholic Church in Tripoli. He said the Libyans are aware that if Filipinos leave, many hospitals will be forced to close. "Libyans regard the Filipino nurses and medical workers as heroes and enjoy some degree of protection," the priest said. He said Filipinos have an advantage over other civilians because Libyans have a high regard for medical workers. Father Arcebuche, who said he is not leaving Tripoli, assured families of Filipinos in Libya that the situation is "still manageable”. "(Filipinos) are relatively safe in their homes and in the hospitals where they work," he said. The Philippine government on Monday reiterated its call for Filipinos to leave Libya. "We are still exerting our efforts and we are hoping that none of our countrymen will be harmed during these current operations," president Benigno Aquino III said. The head of the Philippine Overseas Workers Welfare Administration, however, said mandatory evacuation for Filipinos in Libya may be useless for those who already made up their mind to stay. Administrator Carmelita Dimzon said the Philippine government does not have the manpower to physically go to each Filipino household. "No amount of persuasion or conviction would get them out of their respective worksites," she said. Dimzon said some 2,000 Filipinos are still in Tripoli and Benghazi, most of them nurses, medical workers and engineers. In Manila, police clashed with activists who were protesting on Tuesday against what they called "US intervention" in Libya. No one was hurt in the incident. PM13712.1646