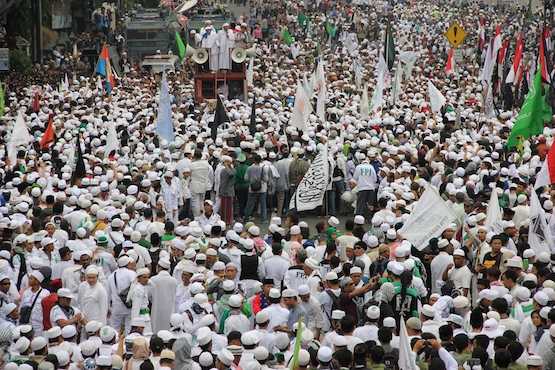 Students were among hardline Muslims who staged a protest against former Jakarta governor Basuki Tjahaja Purnama, a Christian of Chinese decent, on Oct, 14, 2016. (Photo by Ryan Dagur)

A large number of Indonesian secondary and tertiary students have been poisoned by Islamic fundamentalism.

This constitutes a threat to the future pluralism and social fabric of the world's most populous Islamic nation.

And it is a shame for these students themselves as radicalization often comes at the expense of academic achievement.

Surveys over a decade have shown high levels of religious intolerance among students in Indonesia.

A 2011 poll conducted in 50 schools pointed to widespread support for attacks on the places of worship of non-Muslims and allegedly deviating Muslim sects.

The Indonesian National Counter-Terrorism Agency (BNPT), through its own polling, found that 39 percent of students embraced radicalism in fifteen provinces throughout Kalimantan, Sumatra, Sulawesi, Java, Maluku and Bali.

These surveys seem to confirm the finding of the Pew Research Center in 2015 that most of the 10-12 million Indonesians supporting the international terrorist organization Islamic State were young.

All the polls reinforce the notion that radicalization efforts have targeted the younger generation, not least on campuses.

It is dangerous when graduating students go on to spread intolerance, including while holding important official positions or as members of parliament

Psychologically, youngsters are in the process of finding their own identities and are hence vulnerable to negative influences.

There is, co-incidentally, an absence of the state instilling tolerant values through education.

Didin Wahidin, director of student affairs at the Ministry of Research, Technology and Higher Education, robustly criticizes the poor quality of religious education.

Students from elementary to tertiary levels were taught prayers, fasting and a need for charity. However, there was a lack of emphasis on the importance of understanding religion is a social context.

In other words, radicalism grows because of a closed-door transfer of religious understanding among students.

This cuts them off from the moderate practice of Islam as well as from other religious viewpoints.

This trend is worsened by the influence of a transnational Islamic movement at educational institutions.

Sidney Jones, of the Institute for Policy Analysis of Conflict (IPAC), has said that student intolerance is partly a reflection of activist support for Muslim causes.

President Joko Widodo, since he took power in 2014, has expressed concern over persistent intolerance among students.

Many had joined large protests organized by radical groups, including a number with terrorist links.

Indonesia has more than 4600 higher learning institutions and there have been efforts to revamp curriculums, including through greater emphasis on citizenship and Indonesia’s secular ideology, Pancasila.

This is an ideology centered on unity and pluralism, which President Widodo believes could counter inclinations among students to become bigoted.

Even the anti-terror agency BNPT is involved in raising awareness among students on the dangers of extremism and the necessity for critical thinking.

According to Agnes Purbasari, an academic and an official at the recently  established presidential task force on Pancasila, revamping curriculums is essential.

And extremist attitudes could be inculcated by families and radicals within communities as well as by elementary and high school teachers, Purbasari cautioned.

Preaching to the millennials

Nusron Wahid, a politician and adviser at the Mata Air Foundation, a group that promotes moderate Islamic values, called for the freeing of mosques from fundamentalist influences.

Preaching on campuses needed to be done using language that students could understand.

And another large moderate Islamic group - Muhammadiyah - should be more proactive, including through the use of social media, Wahid added.

A substantial number of young people still look up to clerics as role models.

So, the government must be active in the training of preachers, especially those present at tertiary institutions.

After all, combating campus radicalism is a task for government, lecturers, and clerics.