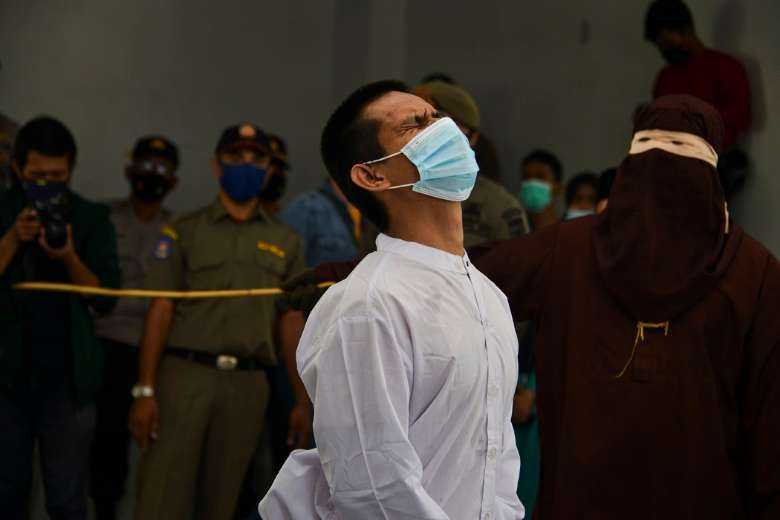 A man accused of having gay sex is publicly caned by a member of the Sharia police in Banda Aceh on Jan 28, 2021. Aceh is the only region in the world's biggest Muslim-majority nation that imposes Islamic law which bans homosexuality. Homosexuality is legal in other parts of the country but frowned upon. (Photo: AFP)

Muhammad Mahfud MD, Indonesia’s coordinating minister for political, legal and security affairs and a former chief justice of the Constitutional Court, said LGBT crimes need to be included in the revision of the Penal Code due to be ratified this year.

Civil society groups opposing the move, he said, only need to submit a judicial review after it is ratified. “If you don't agree, then take it to the Constitutional Court,” he said.

His comments followed an outcry after a gay couple were interviewed in a video uploaded on May 10 on the YouTube channel of a well-known Indonesian podcaster called Deddy Corbuzier.

The video drew strong reactions and many homophobic comments as it was seen as promoting gay sex, which although not illegal in Indonesia is considered strictly taboo. The video was later taken down, accompanied by an apology from Corbuzier.

Although it does not explicitly include the word LGBT, he said, the revision still addresses immorality threats, which among other things are related to same-sex relationships

Mahfud's comments seemed to rekindle the spirit of hardline groups, including a party in the national parliament, looking to push stricter rules against LGBT groups in the revised Penal Code.

Edward Omar Sharif Hiariej, deputy minister of law and human rights, has tried to cool the situation by saying that “LGBT groups are not specifically regulated” and that the revised Penal Code is “gender neutral.”

However, on May 24, Mahfud said Hiariej's comments did not mean to negate his previous statement.

Although it does not explicitly include the word LGBT, he said, the revision still addresses immorality threats, which among other things are related to same-sex relationships.

Bukhori Yusuf, a lawmaker of the Islamic-based Prosperous Justice Party, said Mahfud's comments were "a positive signal" so that the revision of the Penal Code can accommodate punishment for LGBT people, whom it perceives as sexually deviant.

He also said the government and parliament needed to start discussing a bill outlawing the promotion of sexual deviancy which the party proposed in 2019.

Anti-LGBT sentiments also gained momentum when the British embassy in Jakarta raised the LGBT rainbow flag to mark the International Day Against Homophobia, Biphobia and Transphobia on May 17

Asrul Sani from the National Awakening Party, who is also a member of the working committee looking at the revision of the Penal Code, stated the need to clearly regulate “obscene acts between members of the same sex” in the revision.

There appears to be a groundswell of support for such a move on social media.

Anti-LGBT sentiments also gained momentum when the British embassy in Jakarta raised the LGBT rainbow flag to mark the International Day Against Homophobia, Biphobia and Transphobia on May 17.

A photo of the flag on the embassy's Instagram account drew more than 11,000 comments, the majority of which were negative.

It also prompted the Indonesian government to officially express disappointment, calling the flag-raising “very insensitive,” and ask the embassy and representatives of other countries “to always respect the religious, social, cultural norms and beliefs of the Indonesian people.” There is no specific law criminalizing LGBT people in Indonesia. However, in a number of regions, there are regulations specifically targeting them.

In December last year, the Bogor city government in West Java province passed a regional regulation on the prevention and control of sexually deviant behavior.

Between 2006 and 2017, LGBT rights group Arus Pelangi said it recorded 172 cases of persecution of LGBT people in conservative Indonesia, including intimidation, physical and verbal abuse, and maltreatment. It's thought many other cases went unreported.

Meanwhile, a survey conducted by pollster Saiful Mujani Research and Consulting in 2018 found that 87.6 percent of Indonesians saw LGBT people as a threat. It also found that 81.5 percent think that homosexuality was prohibited by religion, 80 percent objected to LGBT people being their neighbors and 90 percent did not want LBGT people to become public officials.

Azas Tigor Nainggolan, a lawyer who also works on the human rights desk of the Indonesian bishops’ Commission for Justice, Peace and Pastoral for Migrant-Itinerant People, said attempts to discriminate against LGBT people, such as in the revised Penal Code, are an "old song" that homophobic groups continue to sing. This, he said, is also a challenge to efforts to fight for equal treatment of all citizens.

He said the Penal Code only needs to regulate the punishment of sexual crimes, without adding any special mention of same-sex relationships. "When it is included, it will only legitimize the persecution of them," he told UCA News.

“I was born male but my sexual orientation is different. Am I straying? No. This deviant perspective needs to be criticized because being LGBT is something that is given naturally”

Hendrika Mayora Victoria, a 35-year-old Catholic transgender person in Flores, East Nusa Tenggara province, said the state does not need to regulate private matters, especially if it is only based on religious views which are constantly used as a reference to claim that LGBT people are sexual deviants.

“I was born male but my sexual orientation is different. Am I straying? No. This deviant perspective needs to be criticized because being LGBT is something that is given naturally,” she told UCA News.

She also criticized the often-used argument that LGBT people are contagious, saying that “sexual orientation is an identity and will not be transmitted to other people.”

"There's no need to think that we are a threat to people who are born heterosexual," she added.

She also said that the challenge for the Indonesian public is to look at the LGBT issue with an open mind from various perspectives, including the perspective of human rights.

"Of course, there are things that are the domain of every religion and we respect those things in principle. But it is also necessary to juxtapose it with other views so that we do not act arbitrarily," she said.

Victoria hopes that the revision of the Criminal Code will not exacerbate discrimination against them. "Discrimination has happened and is still happening. I can't imagine what will happen next if it is reaffirmed in a revised Criminal Code."