Letter from Rome: The pope's race against the clock

Despite advanced age and questionable health, Pope Francis keeps up a busy schedule that looks to get even busier 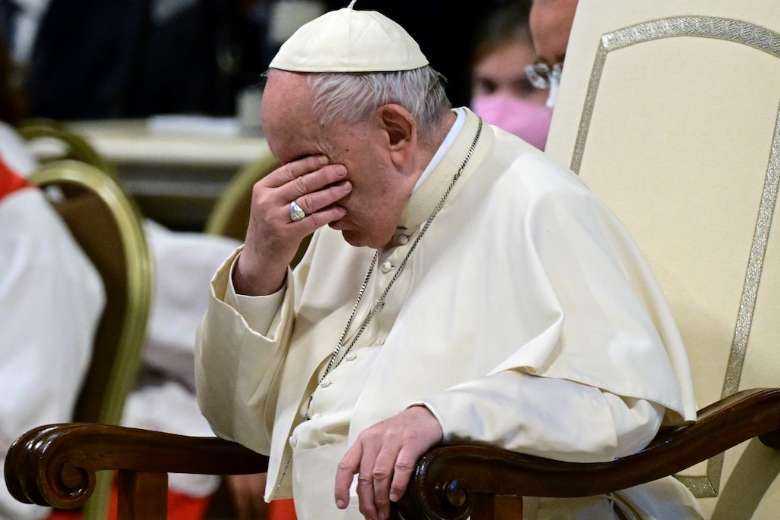 Pope Francis gestures as he presides over the Divine Mercy Mass in St. Peter’s Basilica at the Vatican on April 24. (Photo: Vincenzo Pinto/AFP)

The past several weeks surely have been extremely frustrating for Pope Francis.

First of all, his tireless and ever more urgent appeals for an end to the fighting in Ukraine, which began in late February with Russia's invasion of the country, have been completely ignored.

And he's had absolutely no success in convincing Patriarch Kirill of Moscow, head of the Russian Orthodox Church, to denounce the war or convince Vladimir Putin to agree to an Easter ceasefire.

Francis keeps repeating that he's willing to do everything he can to help stop the war, but he has to know in his heart of hearts that there is no role for the Roman pope in the Russia-Ukraine mess.

That must also be extremely frustrating for him. But whether the war ends tomorrow or drags on for a very long time, there is another issue that is bogging him down. It's his advanced age and questionable health.

MILROY MARTYN
THE CATHOLIC CHURCH IS THE ONLY ORGANISATION WHICH HAS AT ITS HELM OLD MEN WAY PAST RETIREMENT AGE. ITS TIME THAT THE CHURCH APPOINTED YOUNG MEN WHO ARE HIGHLY QUALIFIED AND EDUCATED TO THE HELM OF THE CHURCH. IT IS A PITY THAT AFTER ALL THELEARNING OF THE YOUNG PRIESTS THEY DO NOT GET A CHANCE AT ADMINISTRATION AND ARE OFTEN PUT TO THE SIDELINES AND SOMETIMES RACISM NEPOTISM, CRONISM ARE CHOICES OF APPOINTMENTS TO BISHOPRICS AND SO ON LIKE IN SRI LANKA WHERE THERE IS A HISTORY OF RACISM IN THE APPOINTMENT OF BISHOPS OFTEN IT IS A RELATIVE OF THE INCUMBANT CARDINAL AND MANY HIGHLY EDUCATED YOUNG PRIESTS ARE LEFT OUT OF PROMOTIONS
Reply