A few months after arriving in Rome many years ago to begin theological studies, I received a letter from the person who made it possible for me to be here.

His handwritten letter of Oct. 28, 1986 — which I looked at again the other day — was in response to something I had sent to him several weeks before.

"Truly there is great beauty and much antiquity," he said of Rome. "It helps to sort out the timeless elements of life and those which are time-bound."

His words still resonate with me all these 35 years later. 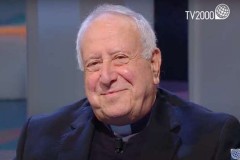