The widespread negative reaction to the latest pronouncement by the Congregation for the Doctrine of the Faith (CDF) — that the Church does not have the power to bless same-sex unions — clearly surprised many people.

Pope Francis was probably among those who were taken back a bit, especially by the fact that more than a few bishops voiced displeasure with the CDF text. After all, he did authorize its publication.

It's fairly normal for theologians to speak out against documents that come from the Vatican's doctrinal office. But it's not so normal when bishops do so, especially when it means "dissenting" from a clear church teaching or discipline.

But that is what has happened. A number of bishops stepped forward (and others continue to join them) to say they disagree with the latest CDF statement, which was merely a reiteration of the Church's official teaching on homosexuality. 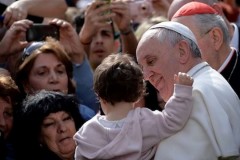