Do you remember the long and ugly battle English-speaking Catholics had over the new translation of the Roman Missal?

It was actually a fight over how best to translate the new and latest edition of the Missal, which Pope John Paul II had issued in 2002. This was the "third typical edition" (editio typica) of the book of prayers used for celebrating the Eucharist — the third such edition following the post-Vatican II liturgical reform.

Pope Paul VI, who was involved in overseeing the reform, issued the first edition of prayers for the revised rite of Mass in 1970. He put forth a second edition in 1975.

And each time, these essential liturgical texts had to be translated into English and other languages. Why? Because the official language of the Roman Missal (Missale Romanum) — in all three typical editions from 1970 to 2002 — is Latin. 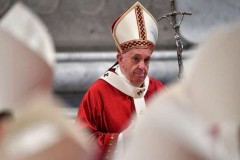