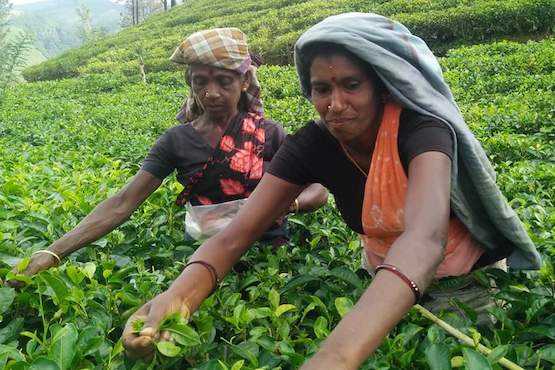 Teams of Sri Lankan workers pluck tea leaves from among acres of terraces. As leopard attacks continue to injure and even kill the workers, many are refusing to work. (ucanews.com photo)

A spate of attacks by leopards in recent months has scared tea pluckers in Nawalapitiya, 112km from Colombo, but for some breadwinners quitting the job is not an option.

For Sajeevani Tharuki, 48, it has meant a change in routine: She now lights a lamp before heading to work in the morning, praying to God to protect her so she can keep looking after her three children when she heads to the tea estate.

However even this does not stop her feeling terrified whenever she or her colleagues hear rumors, or claimed sightings, of a leopard prowling around the terraces in which they work.

She said over the last few months several workers have been injured by such attacks, with many now refusing to work in the estate due to the growing threat.

Tharuki said this is becoming a serious concern in rural communities among daily wage laborers.

"Leopard attacks are injuring workers and some people have been killed," she said.

"At the beginning of this year, a leopard first attacked a woman tea worker in the Hatton area and then went for four others who stepped in to try and save her."

"Some of the women faint at the sight of a leopard in the estate," said Tharuki, who earns 620 rupees (US$5) per day for plucking 18kg of tea on average.

The workers are almost all Tamils descended from those the British brought to Sri Lanka from India in the 1820s to provide cheap labor on the estates. About 52 percent are women.

These women are relatively isolated from other communities. They are extremely poor and do not enjoy benefits such as maternity leave.

Sri Lanka ranks as the world's fourth-largest tea producer, making the industry a major cash crop generating foreign exchange. But those who work the tea estates are underprivileged and landless. They live in severely deprived communities that are largely isolated from the rest of society both politically and economically. Meanwhile, the Sri Lankan leopard is one of the rarest cat species in the world, adding another level of complication to the issue.

Environmental experts say there are only 900 left in the country. Several are known to have died last year but the deaths of hundreds more may have gone unreported as a result of farmers poisoning meat left for them to eat, among other methods used to kill them.

As they find it increasingly hard to find food in the wilderness, leopards have been found wandering the tea estates for the past two years, according to Arul Swamy, who works for the Ceylon Workers Congress (CWC), the largest union representing workers at the estates.

Swamy said overgrown weeds on the estates have made it easier for leopards, snakes and other animals to infiltrate them from neighboring forests undetected.

The latest case of a leopard attacking a group of workers in Hatton highlights the danger posed by the October 2015 ban on glyphosate, a popular weedicide.

Swamy said the January attack, which left seven people severely injured and effectively shut down operations for three days, reflects how the condition of the plantations is slowly becoming closer to that of the surrounding jungles.

"Most of the workers' children will leave the plantations and seek better opportunities in Colombo and other cities," Swamy told ucanews.com.

Environmental activists say the conflict between the big cats and local communities stems from deforestation, and that many killings of leopards go unreported.

Arulthas, a Christian environmental activist in the same district of Kandy said leopards do not typically prey on people and the animals themselves are at risk of being killed at night.

"People have destroyed acres [of forest] to grow tea and the animals now have no food to eat, and no water to drink, so this is a very complicated issue," he said.

"This problem has been going on for many years but unfortunately scant attention has been paid to it and few attempts made to find a solution."

An officer from the Department of Wildlife Conservation, who declined to be named, said leopards prefer to live in the valleys and steep rises of hilly terrain and only migrate to areas populated by people out of necessity, when their survival depends on it.

He said the department knows of several cases in which the big cats have been slain and they plan to start an awareness program educating people about what needs to be done.

Despite the risks, workers continue to flock to the estates to make ends meet.