Oratorios, unique chants and pilgrimages form a spiritual tapestry for the faithful during the 40 days of Lent Oratorios, unique chants and pilgrimages help to grow the faith of Sri Lankan Catholics during the Lenten season.

Father Nirmal Malaka Silva organized Daughter of Zion, a new Sinhala oratorio that describes the seven sorrows of the Blessed Virgin Mary and their meaning.

More than 70 parishioners of St. Joseph's Church in Payagala attended rehearsals every evening for several months for the musical drama performed on March 26.

"Catholics took part in all activities of Daughter of Zion with great devotion and commitment," said Father Silva.

"Every day the group prayed as a team at the beginning and at the end. As a result, the stage oratorio became a huge success."

Father Silva said Catholics practice these devotional activities as a family. "It is very important for adults, youth and children to participate together.”

The priest said only a limited number of people were allowed to see the oratorio due to the Covid-19 pandemic and the fear of terrorism following the Easter bomb attacks in 2019 in which at least 279 people died and more than 500 were injured.

Devotees visit other churches for the Way of the Cross and prayer services during the Lenten season.

Father Silva said many faithful who go to Calvary at the Hiniduma shrine as pilgrims visit his church during Lent.

The journey to the Hiniduma shrine is difficult and tiring but devotees sing Lenten hymns as they walk station by station for the Way of the Cross. The shrine attracts thousands of faithful during Lent from all over Sri Lanka. Niroshani Dayadari, a mother of two, participated in the Way of the Cross and singing lamentation hymns with her group among the hills, valleys and rocks at Hiniduma, which has a replica of the Calvary hill in Jerusalem where the crucifixion of Jesus took place.

The shrine is very peaceful and relaxing for Catholics. It is situated on a small hill next to St. Anne's Church, with the Gin River flowing between the church and the shrine.

Catholic faithful arrange the pilgrimage to walk around the small hill lined with statues depicting the crucifixion of Jesus in 12 locations. A large cross stands on top of the hill.

Catholic mother Jasintha Liyanage was among a group of men and women who sang unique Lenten chants on March 29 at St. Joseph Vaz College in Wennappuwa.

She learned Pasan from her father and mother during her childhood. Following in the footsteps of her parents, she has been a member of the group for more than 25 years. These hymns are a kind of prayer and a call to repent for sins.

Father Jacome Gonsalvez, an Oratorian priest from Goa, India, introduced Pasan to Sri Lanka when he went there to assist St. Joseph Vaz, the first saint of the island, who landed in 1686. 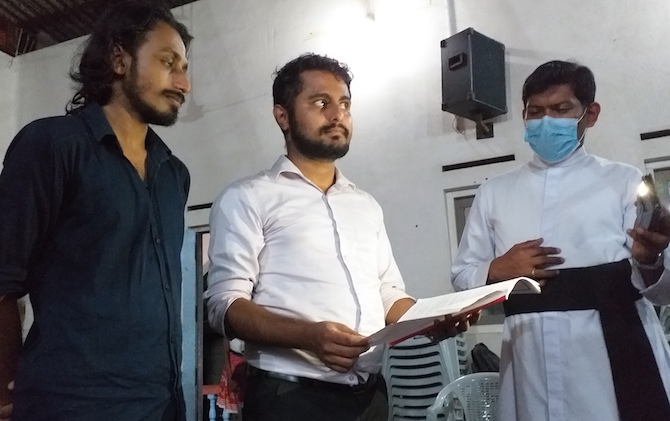