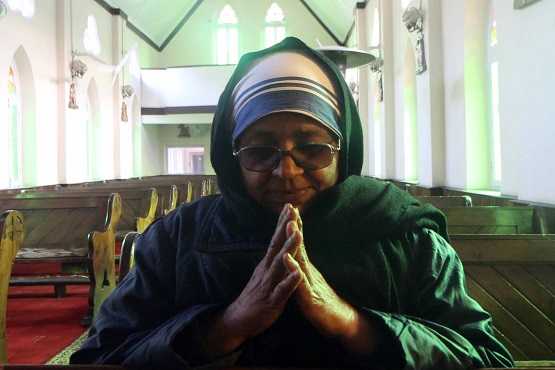 Missionaries of Charity Sister Josette praying at Holy Family Catholic Church in Srinagar. Lent is a time for the parishioners to help their Muslim neighbors. (Photo by Umar Asif)

Several Catholics in India's Jammu and Kashmir state have decided to use money saved by their Lenten sacrifices to help people affected by recent violence in the Muslim-majority region.

"Our family doesn't eat much during this period; we abandon buying expensive things and whatever is saved out of this exercise we give to the poor," said Peter Soney, a Catholic parishioner in Kashmir, a troubled region bordering Pakistan.

The state witnessed a five-month uprising beginning on July 8, 2016 when the Indian army shot and killed militant leader Burhan Wani. He led a separatist faction that was waging a campaign against Indian rule.

The resulting cycle of violence left the region's economy in tatters with the poor bearing the brunt.  Daily laborers were worst affected as they couldn't find work amidst curfews and shutdowns.

Soney, a retired government employee, who lives north of the Jammu and Kashmir state capital of Srinagar, said his family's savings during Lent would be given to his Muslim neighbor, a cart puller, whose livelihood was affected by last year's violence.

"I can only tell you that he was badly affected by the unrest. He has little kids and meagre income. I am duty bound to get him out of the crisis," Soney told ucanews.com.

Another parishioner Alex Richards said Catholics in the region do not discriminate in their charity. "This is what charity means. It is bizarre if you ask a deserving person his faith before giving him alms," Richards told uncanews.com.

A government employee, Richards said, besides fasting, he gives up eating out and buying new clothes. He also uses public transport instead of his car. "I keep a close check on my expenses with a view to help the poor affected by the violence," Richards said.

An economic survey by the Kashmir government in January showed the violence had put a halt on economic activity of the region costing businesses 160,000 million rupees (some US$2.4 billion). The violence also destroyed property worth millions besides blocking tourists from the region during its peak season.

"The church appreciates such initiatives and would encourage parishioners to take lead in extending help to the downtrodden," Father John Paul, parish priest of Srinagar's Holy Family Catholic church told ucanews.com. He said his parishioners are doing this of their own accord and not part of a parish campaign.

Father Sebestian Nagathunkal, principal of the church-run Burn Hall School in Srinagar said helping "the downtrodden is what Lent is all about. People, irrespective of their faith, should be helped and Catholics have a golden opportunity to do their bit during this year's Lent," Father Nagathunkal told ucanews.com.

"The labor class has been at the receiving end of constant curfews. They have families that deserve donations from parishioners and therefore such acts need to be encouraged," Father Paul added.

Some 60 percent of the state's 12.5 million people are Muslims and Hindus form 30 percent, making it India's only Muslim-majority state. Christians are a minuscule minority of 35,000 people, half of them estimated to be Catholics.

Missionaries of Charity Sister Josette, who works in the area, told ucanews.com that religious harmony is taking root in Kashmir. "Education enlightens people and young people in Kashmir are taking the lead to strengthen the bonds of mutual brotherhood. I see Catholic children wanting to help people whose livelihood got shattered due to violence. We should cherish this," the nun said.

The nun added that she has come across many Catholics who have decided to help those affected by the violence and "Lent is the best time to help. This is what Jesus taught to come closer to humanity and be human in all things."