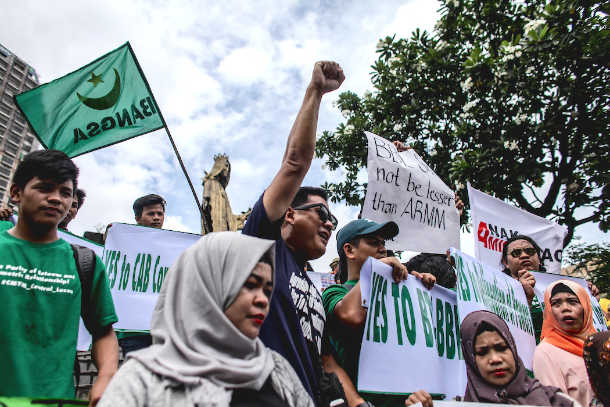 Moro people from the southern Philippine region of Mindanao show their support for the passage of a law that will create a new autonomous Muslim region during a demonstration in Manila on July 11. (Photo by Basilio Sepe)

A congressional body in the Philippines tasked with drafting a law that would create a new autonomous Muslim region in Mindanao approved the final version of the legislation late on July 18.

After a week of heated debate, the 28-member bicameral conference committee approved the final version of the Bangsamoro Basic Law, which it is hoped will help end decades of violence in the southern Philippines.

It provides for a bigger regional government, a parliament, fiscal autonomy, and a justice system for the proposed Muslim region.

Congress will ratify it on July 23 before President Rodrigo Duterte signs it into law later in the day.

Congresswoman Amihilda Sangcopan, from the Anak Mindanao (Children of Mindanao) Party, said Moro legislators had "fought hard for the passage of the peace bill."

"We bore the moral obligations ... to push for a peaceful and just resolution to almost half a century of struggle for self-determination," said Sangcopan.

She said the Moro people of Mindanao "will have something better than the status quo that is the Autonomous Region in Muslim Mindanao [ARMM]."

The Bangsamoro Autonomous Region in Muslim Mindanao (BARMM) will replace the ARMM, giving the region a greater say over its own affairs, and will be headed by a chief minister and a ceremonial leader called a Wali.

Under the law, a 75-25 wealth sharing or 75 percent of the national taxes will go to Bangsamoro and the remaining 25 percent will be left to the central government.

It also grants an annual block grant of a five percent share of the national internal revenue or an estimated US$1.1 billion to be given without any conditions to the Bangsamoro region.

The Bangsamoro region's police and military will still be under the control of the national government and its Sharia or Islamic law, tribal and traditional, and other relevant laws should be in consonance with the Philippine Constitution.

The new region covers the current ARMM provinces of Tawi-Tawi, Sulu, Basilan, Maguindanao, and Lanao del Sur, while regional plebiscites are still to be conducted.

These will include six municipalities in Lanao del Norte and 39 villages of North Cotabato province for inclusion provided there is a favorable majority vote.

The cities of Cotabato and Isabela are also subject to a vote for inclusion in the proposed region.

Legislators said the votes for the new Bangsamoro region will be held not earlier than 90 days and not later than 150 days after Duterte signs the new law.

Government peace advisor Jesus Dureza said the road toward achieving lasting peace in Mindanao will not be easy and needs the cooperation of everybody.

"This is a milestone," he said of the new law. "But [this is] still the beginning of more work to bring sustainable peace," he said in a text message to ucanews.com.

Cardinal Orlando Quevedo of Cotabato said that a good Bangsamoro law would help prevent the spread of Islamic State ideology in Mindanao.

The prelate said Mindanao is now on the "cusp of peace."

Bong Sarmiento contributed to this report from South Cotabato.