Men who fought for the South say they are abandoned 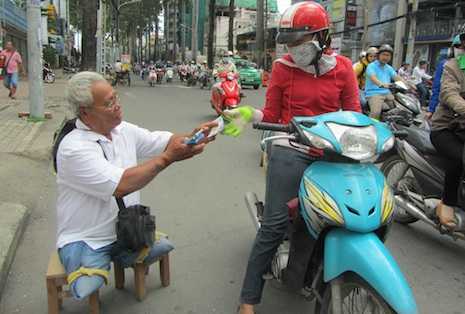 Nguyen Van Quang sweats heavily in the midday sun as he solicits passers-by at a crowded intersection in Ho Chi Minh City to purchase lottery tickets.

It is a trade he has plied for more than 30 years in the glaring heat or the pouring rain.

“Please buy tickets. Please help me,” he pleads to the crowds. When he senses interest, he drags himself along the ground to secure the sale.

Quang lost his legs and a finger in a bomb attack by Communist guerrillas in 1973.

“I was a South Vietnamese soldier. I joined the army to get money to support my family,” says the 61-year-old. “I am a victim of the war.”

Quang’s injuries prevented him from finding any other employment. So he pedals dreams of prosperity on the crowded streets, earning about 150,000 dong (US$7.50) per day. When he can, he sends money to his family in neighboring Tay Ninh province.

In the rainy months, Quang says he has no money to send home. His four children have already had to drop out of school because he can’t afford the fees.

About a quarter of a million South Vietnamese soldiers died during the war, according to US estimates. After the fall of Saigon in 1975, about a million more fled the country for fear the victorious Communists would exact revenge.

Those who stayed were persecuted, imprisoned, put in re-education camps or forced to live in remote areas, says Quang, adding that their children were barred from studying at universities or working for the state.

Quang believes about 600 South Vietnam veterans are still alive, scraping a living or begging, effectively abandoned by the government.

Quang says he is still treated with suspicion even today. “[Veterans] are frequently questioned by the police if we gather at a place for a meeting.”

He added that veterans also remain studiously silent about politics for fear that they will be “invited to have tea with the police”, a colloquial way of referring to interrogation.

Joseph Nguyen Van Duong, a South Vietnamese veteran who lost his right leg during the war, works as a clothes maker. His three children dropped out of school and became bricklayers and recyclers to help support the family.

Duong adds that he sometimes receives money from fellow veterans who emigrated to the US, which helps keep his family from dire poverty.

While the government has largely neglected the veterans, local religious groups have picked up the slack.

Last month, local Redemptorists, Lutheran pastors, Buddhist monks and dignitaries of indigenous faiths gathered to offer gifts and food to about 220 South Vietnamese veterans made invalid by injuries sustained during the war.

Duong said he and his fellow soldiers were overjoyed by the generosity of the religious leaders.

“We are very happy that for the first time we have publicly been treated with respect and kindness,” he said. He added that many at the gathering also called on the government to provide better aid to South Vietnamese veterans.

By contrast, the Vietnamese government regularly honors its Communist veterans with money, gifts and other benefits.

A Communist soldier who goes by the name Binh says he receives a stipend of 800,000 dong each month and has access to free healthcare. His children also received free tuition and were placed in good jobs.

Also last week, 82-year-old Ho Van Thanh, a former North Vietnamese soldier, and his 42-year-old son were taken out of a jungle hideout in Quang Ngai province. They had been living there since before the war’s end after losing family members in a US air raid in 1972.

Thanh is being well cared for at a local hospital, according to media reports, and area residents have contributed food and clothing for the two men.

The government also plans to issue updated identity papers and build them a new home, the media reports said.

Duong said that South Vietnamese veterans, particularly those whose injuries prevent them from caring effectively for their families, deserve the same kind of support.

“We sacrificed ourselves for our nation. We are terribly sad to be treated so unfairly,” he said.