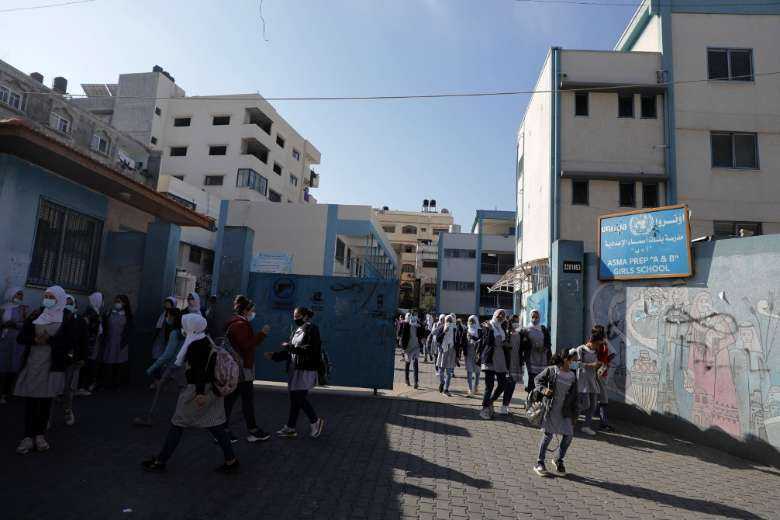 Palestinian students wear protective face masks due to the COVID-19 pandemic walk back home from their UN school in Gaza City on November 17, 2020. (Photo: AFP)

At the start of a new academic year, uncertainty clouds the future of Catholic schools in Lebanon. Amid the country's economic meltdown, Catholic schools have exhausted their resources, and their future is at risk.

Lebanon's 330 Catholic schools together educate nearly 200,000 students, but 80% of them are under the risk of closing, said Melkite Father Youssef Nasr, secretary-general of Catholic schools in Lebanon.

"We are facing this crisis with empty pockets," Father Nasr told Catholic News Service. "We are under tremendous pressure."

In-school learning in Lebanon has been disrupted for two years, first by nationwide protests that swept the country in October 2019, followed by COVID-19 lockdown measures.

"We can't leave our students at home for a third year. They are facing a learning, psychological and a social loss" from not being in school, Father Nasr said.

On top of the educational void, the Lebanese currency has plummeted by more than 90% in less than two years, wiping out the middle class. According to the United Nations, 78% of Lebanese now live below the poverty line, up from less than 30% before 2019.

Parents have seen their salaries dwindle to barely a tenth of their previous dollar values. Many have not been able to make tuition payments for two years.

Of the country's 330 Catholic schools, 90 serve the disadvantaged; their tuitions are nominal, and the Lebanese government is to provide a subsidy of approximately 50% for a portion of the student body. However, the government has not paid any such subsidies since 2016.

After more than a year of paralysis without a government, a Cabinet was formed Sept. 10. The new prime minister, Najib Mikati, has pledged to unlock international aid that is contingent on the Lebanese government implementing reforms after decades of corruption and mismanagement.

"Church initiatives are valuable and commendable, and they are necessary because they contribute to preventing a total collapse, but at the same time they do not constitute a sustainable solution to education. The state is the solution," he said.

Father Nasr said he hopes the new government "will give education the priority it deserves and consider it as the real wealth of the country."

The Vatican nuncio to Lebanon, Archbishop Joseph Spiteri, also addressed the meeting. Looking toward the new minister of education, Abbas Halabi, seated in the front row, the nuncio said: "We expect a lot from you and the new government. Also, we assure you that the Catholic schools in Lebanon have been, are, and will be always at the service of the whole nation."

Known for their high level of academics, Lebanon's Catholic schools are typically trilingual, with students learning in Arabic, French and English. Graduates often continue higher studies in the best universities in the West.

Lebanon's Catholic schools also have a long-standing tradition of educating all religions.

"This is the mission and identity of Lebanon, the intercommunity," he stressed, pointing to St. John Paul II's declaration that "Lebanon is more than a country. It is a message of freedom and an example of pluralism for East and West."

"I think that Muslims in Lebanon are eager to join our schools," Father Nasr noted. "They like our education, our values and they know very well that we are open-minded and that we respect the others."

"We teach our students in equality, in respect, without discrimination. Our schools are a community for everyone," he added.

Should Catholic schools close in those areas, Christians would move to Beirut or even outside the country for a good education, he said.

"It is a big danger if our schools close," Father Nasr warns. "The danger first of all will be on the Christian society, affecting Lebanon's demographics."

Secondly, Father Nasr continued, "the level of education will collapse, because Catholic schools are known for their high level and quality of education."

Father Nasr maintains that raising tuition is not an option during the unprecedented economic crisis, deemed by the World Bank as one of the worst worldwide since the 1850s.

"Our families are suffering and we have to be beside them and help them. We don't have the right to raise the tuition," he told CNS.

Among the proposals to the new government, Catholic officials are asking that the new Lebanese government provide $200 for each student. With the depreciation of the Lebanese currency, that would provide a significant amount toward a student's tuition, Father Nasr said.