Limits on childbirth and movement were directed at highest level 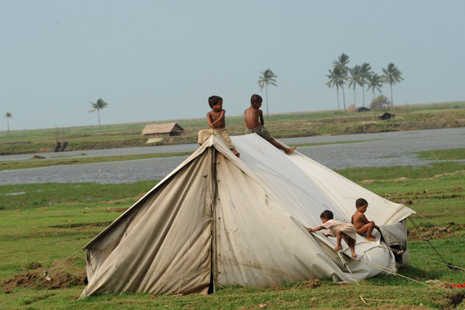 Documents leaked to a Thailand-based rights group show evidence that the persecution of the Rohingya minority in Myanmar is official state policy, with copies of government directives released that order authorities to restrict Rohingya families to two children and tightly control the Muslim group’s movement.

The documents, released on Tuesday by Fortify Rights in a report titled "Policies of Persecution: Ending Abusive State Policies Against Rohingya in Myanmar," represent the first proof that abuses against the group are codified in law and ordered by the highest level of government.

One order dating from May 2005 and circulated among authorities in northern Rakhine state’s Maungdaw says that “those who have permission to marry must limit the number of children, in order to control the birth rate so that there is enough food and shelter”.

Since then, according to Fortify Rights, Rohingya have been made to sign agreements that they will not have more than two children. Violation of this agreement can result in a 10-year prison sentence. Another directive states that any Rohingya deemed to have had extra-marital relations can be imprisoned for up to one year.

In order to enforce population control measures, officials are urged to demand that Rohingya women breastfeed in their presence “if there is suspicion of someone being substituted” in the family. Like the rules that prevent Rohingya travelling outside of their townships without permission, these policies are reserved only for Rohingya, and not other ethnic groups. This has led observers to conclude that they are being targeted because of their ethnicity and/or religion, which amounts to a crime of persecution.

“These policies are being supported by the highest levels of government, the same officials now being courted by Western governments,” said Matthew Smith, executive director of Fortify Rights and a co-author of the report. “These officials don’t see the need to end abuses of the Rohingya as part of wider reforms.”

Western Myanmar’s Rakhine state has been beset by several waves of violence between Rohingya Muslims and Rakhine Buddhists since June 2012. Like the government and the majority of Burmese, the Rakhine consider Rohingya to be illegal Bengali immigrants, and thus deny them citizenship status and the accompanying rights to healthcare and education.

In the Rakhine state capital of Sittwe, Rohingya have been forced to either leave their homes and move into refugee camps, or remain in Muslim-only ghettos where armed guards patrol barbed wire barricades and prevent residents from leaving.

One Rohingya man in Sittwe's Bhumi quarter who spoke with ucanews.com in February said he was forced to seek medical treatment in a clinic in a nearby refugee camp because police had denied him permission to visit Sittwe’s main hospital.

“It’s plain to see authorities have made life so intolerable for Rohingya that in many cases they have no option but to flee to another country,” Smith told ucanews.com. While these abusive practices have been known to human rights monitors for some time, he said that “it’s a whole other thing to have documents that prove intent and knowledge of the government of systematic abuse”.

The material contained in the report would meet the evidentiary threshold for state-directed persecution, one of the most serious international crimes. Smith said he believes these policies are “just the tip of the iceberg” of internal government communications – more recent lobbying of the government by Rakhine politicians to have these restrictions further tightened could worsen the situation.

Work on a nationwide census will begin on March 30, but a requirement to list ethnicity could further inflame tensions. A recent briefing by the International Crisis Group said that the last census in 1983 may have artificially lowered the population count for Muslims, meaning that an accurate figure this time round could be used as proof by anti-Muslim nationalists that the Muslim population is expanding rapaciously.

Fortify Rights has called for an immediate end to abusive state policies in Myanmar, but warned that thus far, investigations carried out by the government into the violence in Rakhine state have not addressed the need to bring to a stop the persecution of the Rohingya.