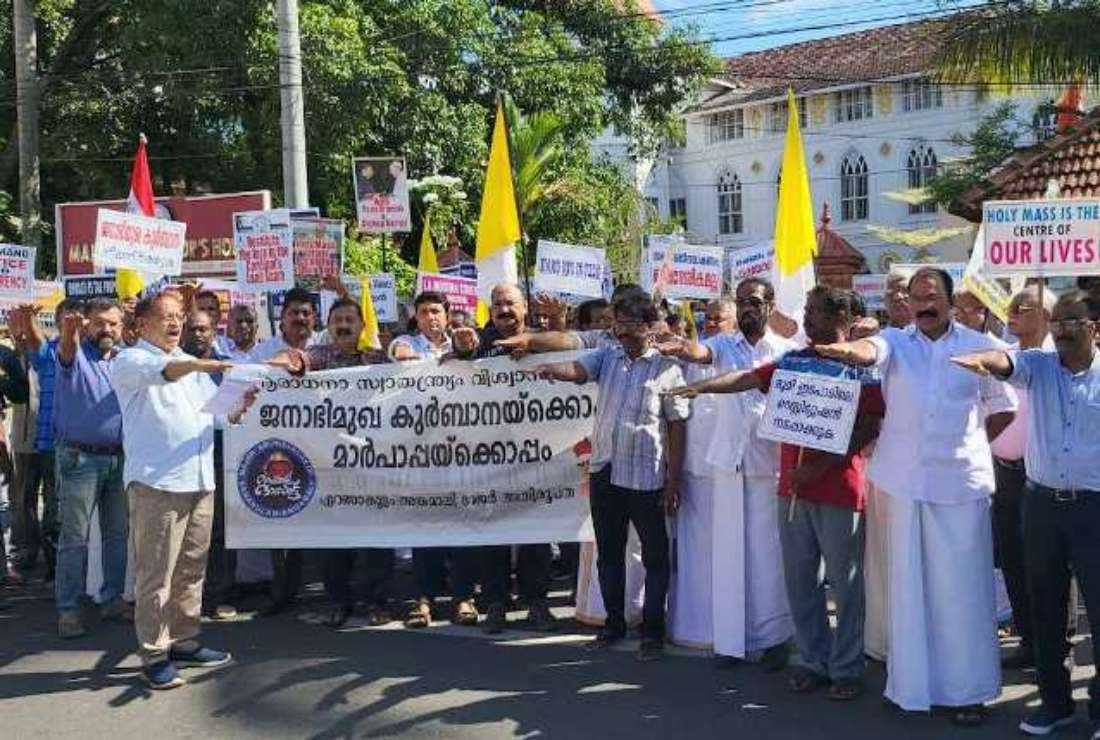 Lay people at the Ernakulam-Angamly archdiocese in the southern Indian state of Kerala on Oct. 16 take a pledge to not allow Arhcbihsop Andrews Thazhath, the apostolic administrator, to enter the Archbishop’s House accusing him of misleading the Vatican against their interest in a long-standing liturgical dispute. (Photo supplied)

Laypeople in an archdiocese in India’s Eastern-rite Syro-Malabar Church have begun a round-the-clock vigil to stop the Vatican-appointed administrator from gaining entry into Archbishop’s House.

Lay leaders in the Kerala-based Ernakulam-Angamaly Archdiocese of the Syro-Malabar Church say Archbishop Andrews Thazhath, the apostolic administrator, unilaterally revoked the dispensation which so far allowed the priests to say Mass facing the people.

The vigil was launched on Oct. 16 and teams of laypeople from different parishes have been assigned to ensure a 24-hour watch.

“We no longer want the apostolic administrator to get inside our Archbishop’s House,” said Riju Kanjookaran, the spokesperson of the Archdiocesan Movement for Transparency (AMT) told UCA News on Oct. 17.

The protesting priests and laity have been demanding the resignation of Archbishop Thazhath, accusing him of misleading the Vatican and trying to impose the liturgical pattern approved by the bishops’ synod that requires priests to face the altar against the congregation during the Eucharistic prayer until Communion.

The Vatican appointed the archbishop of Trichur to be the apostolic administrator of Ernakulam-Angamaly on July 30 with a mandate to settle the liturgical dispute caused by the stiff opposition to the decision of the synod to have uniformity in the celebration of Eucharist.

The resistance to Archbishop Thazhath took a dramatic turn on Sept. 30 when he ordered all the priests to say the synod-approved Mass with immediate effect and revoked their dispensation.

Most priests publicly defied the order and continue to say Mass facing the people. The priests also refused to read out a circular on Oct. 9 issued by Archbishop Thazhath, which announced the revoking of the dispensation and his order to the priests.

Barring four parishes, more than 450 institutions including 328 parishes and sub-parishes, besides religious houses have refused to follow the apostolic administrator’s orders, Kanjookaran said.

Archbishop Thazhath, in a video message, defended his decision saying he was merely following instructions from the Vatican.

The prelate, currently in the Vatican, further said he had called on Pope Francis, who urged the priests and laity to comply with the synod decision.

The prelate also shared a 35-second video clipping of him meeting the pope during his general audience last Wednesday in the Vatican.

The prelate also claimed to have briefed Pope about the demand of the people but the pontiff insisted on “asking them to obey” the synod.

Archbishop Thazhath in his eight-minute message said he also had detailed discussions with officials in the Vatican and blamed his predecessor, Metropolitan Vicar Archbishop Antony Kariyil, for misleading the faithful and granting dispensation from offering the synod mass.

Archbishop Kariyil was forced to resign after he refused to revoke the dispensation despite pressure from the synod.

Shaiju Antony, the convener of the AMT, told UCA News that “what Archbishop Thazhat said in his video message from the Vatican is full of lies.”

He said their people in the Vatican informed him that Archbishop Thazhath could not get a private audience with the pope despite staying for more than 10 days.

“He met the pope during his general audience and there was hardly any time to discuss such a serious issue in a couple of seconds,” Antony explained.

The AMT office-bearers were of the view that the pontiff had settled the matter when he permitted Archbishop Kariyil to give dispensation to their archdiocese in November last.

“It was the Syro-Malabar synod that undermined the order of the pope,” Antony alleged.

The liturgical dispute in the Syro-Malabar Church dates back nearly five decades when the Church initiated a revision of its liturgy. The simmering controversy was revived in August 2021 when the synod decided to implement its 1999 decision of introducing uniformity in Mass across all the dioceses to bring in more unity among its members.

All 35 dioceses of the Church, dioceses except in the Ernakulam-Angamaly Archdiocese have begun following the synod-approved mass from November.