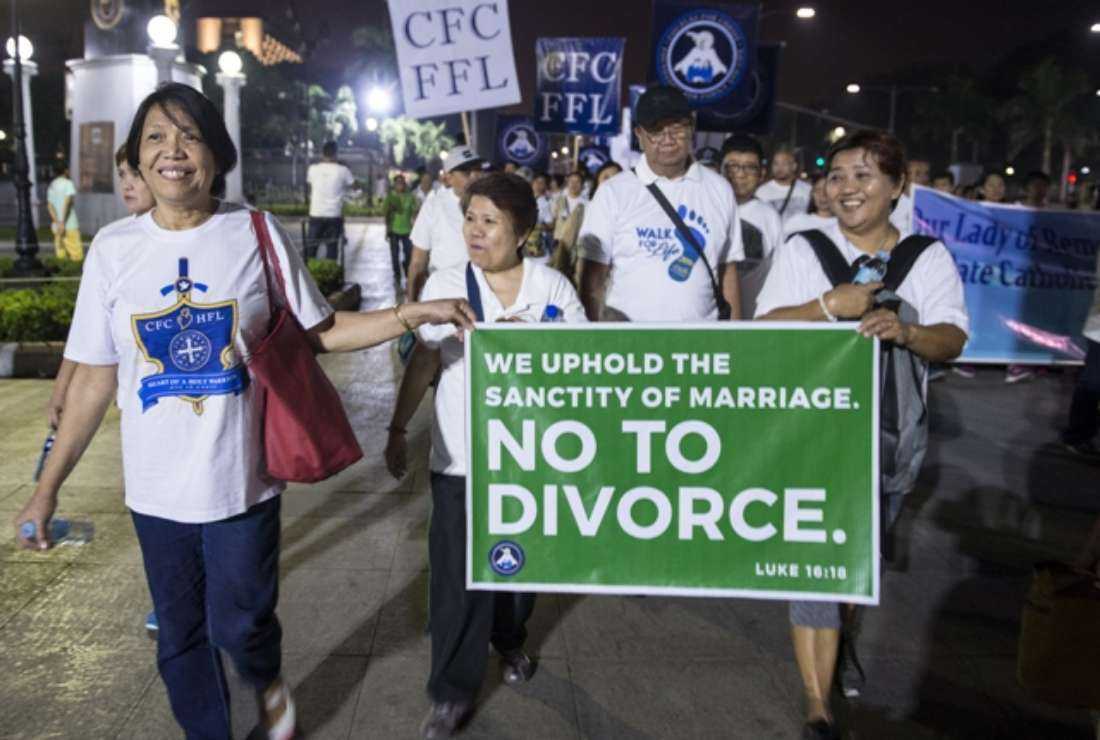 Philippine Catholic faithful hold a banner against absolute divorce as they take part in a "Walk for Life" protest at a park in Manila, on Feb. 24, 2018. (Photo: AFP)

A Philippine lawmaker is taking a second shot at legalizing divorce in Asia's only Catholic-majority country.

A previous bill was set aside by the Senate under former President Rodrigo Duterte after being approved by the Committee on Population and Family Relations in the House of Representatives as the coronavirus pandemic hit the country.

The Philippines is the only country, aside from the Vatican, to outlaw absolute divorce even though the Catholic hierarchy grants canonical dissolution of marriage.

The country allows declaration of nullity based on psychological incapacity, a long and expensive legal process that only the court could decide, not the couple themselves.

Lawmakers pushing for absolute divorce say it is time for the Philippines to pass a law because defective marriages were leading to increased women and child abuse in the country.

Lagman, who is a lawyer, told the media on July 4 that divorce was the key to liberating both sexes in a troubled relationship that diminishes the quality of life of the couple and their children.

Lagman said Filipinos did practice divorce in the pre-Spanish era and so the bill was not totally alien to Philippine culture.

“We had divorce during the time of our grandfathers and grandmothers. Thus, the bill only reinstates divorce because we had this already even during the Spanish occupation,” the lawmaker added.

Lagman further cited the ruling of the Supreme Court saying that severance of a marriage bond is a decent interment of a long-dead marriage.  Divorce was not a violation of the Philippine Constitution, which upholds family life, and divorce could sometimes be the panacea to uphold family life, he added.

Marriage is a social institution, the foundation of the family and is inviolable, but “the framers of the Constitution were unanimous that the Congress is not prohibited or precluded from instituting absolute divorce and dissolution of marriage under the current Charter,” Lagman said.

Conservative groups, however, say his legal logic is erroneous.

“How can Congressman Lagman say that divorce is pro-family life when it destroys the family? The children are the ultimate victims of divorce, not the couple,” Jason Tolosa, a group member of Manila Family Life, told UCA News.

Tolosa said divorce could be prone to abuse by the rich because they could afford to go to court.