Late Vietnamese priest remembered for being an inspiration 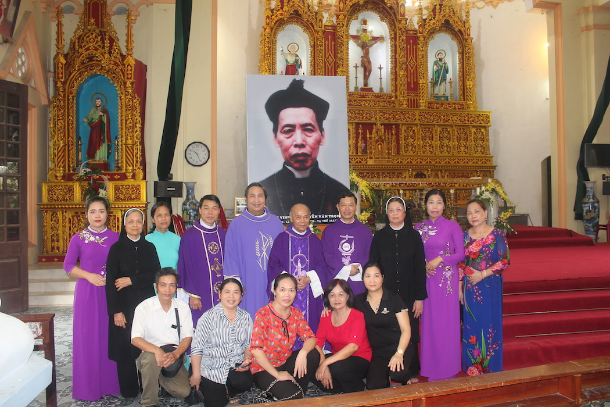 Catholics pose in front of a portrait of Father Vincent Nguyen Van Trong at Yen Bai Church on June 10. (Photo by Joseph Nguyen)

Father Vincent Nguyen Van Trong may have died 25 years ago but he hasn’t been forgotten by those lives he touched, especially those he guided to become priests and religious.

Some 500 people attended a Mass in Yen Bai Province on June 10 to mark the 25th anniversary of the death of Father Trong.

Fifteen priests concelebrated the Mass at Yen Bai Church to honor the man who actively carried out evangelization efforts during difficult times in northern Vietnam. Following the Mass, Catholics offered incense and prayed by the late priest’s tomb in the church’s compound.

Father Trong, a member of the Mother Coredemptrix Congregation, began evangelizing in the province in 1941, when he was 18 years of age.

Mary Nguyen Thi Thuy from Cang Huong Ly, said before his ordination, the then brother Trong masqueraded as a herbal medicine trader so that he could approach ethnic villages because local priests were banned from visiting them.

Thuy, 53, said Father Trong was a good shepherd and was friendly with all people.

“I followed his service by training catechists at parishes since 1992,” she said.

Father Trong was ordained a priest for Hung Hoa Diocese in 1978 and served Yen Bai Parish until his death in 1994.

Father Michael Le Van Hong said Father Trong was active in promoting religious vocations among local people. The late priest did this despite all seminaries and institutes in northern Vietnam being closed or confiscated by the communists, said Father Hong.

When the communists eased their anti-religious policies in late 1980s, Father Trong sent some young hopefuls to study at a major seminary in Hanoi and other church institutes in the country’s south, he said. Father Hong was among the dozens of men and women who Father Trong helped became priests and religious.

“I learned lessons in humility, persistence, patience and selfless service to the community from Father Trong,” said the priest who is the pastor of Phung Thuong parish in Phu Tho province.

He said that Father Trong’s teachings helped many Catholics lead a good life and especially those who were married.

Father Hong, who was ordained in 2002, said he followed Father Trong’s examples by volunteering to serve ethnic groups of Hmong, Tay and Thai in the parishes of Van Chan and Nghia Lo where there had been no resident priests for 40 years.

Father Peter Pham Thanh Binh, the pastor of Sapa Parish in Lao Cai province, said he is grateful to Father Trong for leading him to the priesthood.

“His service inspires me to be committed to evangelizing ethnic groups in remote areas,” Father Binh said.

Some elderly Catholics said Father Trong and another priest gave pastoral care to 40,000 Catholics in four provinces over the course of several decades.

Father Trong also built Yen Bai Church which replaced an old one destroyed by the country’s conflicts. On one occasion he gathered thousands of Hmong people for a week at Yen Bai Church offered them food and gave pastoral care to them.