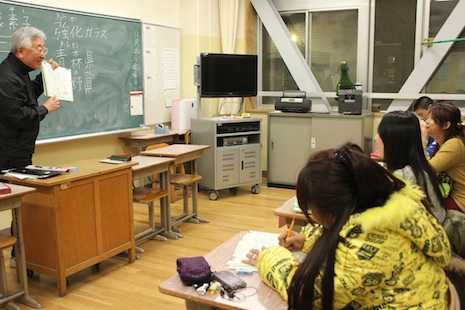 There are eight public junior high schools in Tokyo that offer night classes. As of June 1 this year, there were 420 students enrolled in them, but surprisingly only eight percent were Japanese. The other 92 percent were from overseas representing nearly 25 countries from across the world.

Night classes are for students who have passed the age of compulsory education (which applies until the first March 31 after a student’s 15th birthday) but have not yet finished studies covered by the compulsory curriculum. At present, only the eight most populous of Japan’s 47 prefectures offer such programs. At Adachi Ward Daiyon Junior High School in Tokyo, 75 of 78 students were non-Japanese this year. The student body has a large Chinese, Filipino, and Vietnamese population, with ages ranging from 16 to 80. Their classes run from 5:25 to 9:00 and include a meal provided by the school, five days a week.

At this school, 10 classes are offered, including six Japanese courses. The rest cover general topics specified by the traditional junior high curriculum for public schools. The faculty has 14 teachers, including Park Won-gang, 57. “Some of our students don’t understand a word of Japanese. After studying Japanese for a year, they learn to understand enough that they can move on to the general lessons. A lot of them are also working, so they need to study at least a year; most graduate after two or three years,” explains Park. People come to study for a variety of reasons. Some were bullied while they were at school and dropped out; others came with their parents to Japan but never enrolled in school. Many just skipped classes to help their family make ends meet. Park’s Japanese section has six students, four of whom are Catholics. One, a 16-year-old girl, came with her mother from the Philippines six months ago and has just started Japanese instruction. The girl is homesick and wishes she could return to her homeland, but her mother has no intention of going back. One 27-year-old woman who attends a Vietnamese-language Mass here in Tokyo said, “I studied up to the second year of junior high school in Vietnam, but after my family came to Japan, I had to work to help out with our family finances, so I couldn’t go to school. “But I decided that I really wanted to learn, so now I work from nine to four each day, and then immediately come to class. I don’t usually get home until midnight. It’s tiring, but I want to graduate junior high and then move on to high school.” Why are there so many foreign enrollees in night school? One explanation is that it has a deep connection to what some call “ageism”—age discrimination—in the Japanese compulsory education system. After children pass the standard ages for enrollment in compulsory education, they are no longer eligible to enroll in elementary or junior high schools at all. In March, 2009, the Ministry of Education, Culture, Sports, Science, and Technology (MEXT) voiced concern over the Japanese language proficiency of foreigners and announced that it would allow non-native children to join lower-level classes. Then, in May of 2010, MEXT approved the enrollment of students who had passed the age of compulsory education. The response, as the statistics show, has been positive and encouraging.