Cardinal Nicholas Cheong Jin-suk Missionary Support Association was officially launched on Oct. 15. It has been elevated from a mission support group sponsored by the archdiocese in line with the wishes of the late church leader, reports Catholic Times of Korea.

Cardinal Andrew Yeom Soo-jung, archbishop of Seoul, approved the establishment of the association on Aug. 20 to fulfill the wishes of his predecessor.

It aims to support lay missionaries as well as struggling actors and cultural artists in the country and beyond as a way of expanding Catholic cultural missionary work.

The new association’s activities are divided into two categories.

Firstly, it will commission laypersons to conduct missionary activities in poor areas in Southeast Asia and offer donations where it is necessary as per recommendations from local priests, religious, individuals and Vatican embassies.

Secondly, it aims to lend a helping hand to Catholic actors and artists who face difficulties. This is the first time the Korean Church has undertaken initiatives to offer economic and non-economic support to cultural activities.

The cultural support project dates back 10 years to when Cardinal Cheong met a senior Korean actor, Kim, during a movie premiere. The actor was reportedly moved by the meeting as he said: “Mission is always the standard when it comes to words and actions.”

He later visited Father Heo Young-yeop, who was then head of the public relations department of Seoul Archdiocese. He donated 40 million won (US$34,000) to missionary efforts started by Cardinal Cheong.

Kim said he was inspired to support missionary activities because “faith has been a great strength to me when I endured difficult times.” 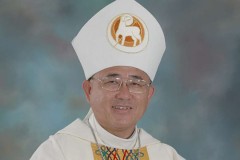 Initially, the mission support association will continue for 10 years until 2031, the birth centenary of Cardinal Cheong.

Nicholas Cheong Jin-suk was born on Dec. 7, 1931, in Seoul. He studied chemical engineering before joining priestly formation. He was ordained a priest in 1961 and obtained a degree in canon law at Pontifical Urban University in Rome.

At the of 39, he became the bishop of Cheognju Diocese, the youngest bishop in South Korea, leading the diocese until 1998 when he became archbishop of Seoul.

From 1996-99, he was president of the Catholic Bishops’ Conference of Korea (CBCK) and head of the CBCK committee for canonical affairs from 1983 to 2006.

He authored over 60 books, mostly on canon law and the catechism of the Catholic Church

Cardinal Cheong was a pacifist who, as the apostolic administrator of Pyongyang Diocese, promoted a series of peace efforts with North Korea.

He also promoted evangelization in South Korea and was a strong pro-life advocate opposing abortion. Pro-life issues became pastoral priorities during his time at Cheognju and Seoul.

He authored over 60 books, mostly on canon law and the catechism of the Catholic Church.

He died at church-run St. Mary’s Hospital in Seoul on April 27.