An an educator and humanitarian, Father Alfred Deignan focused on values like integrity, compassion and human dignity 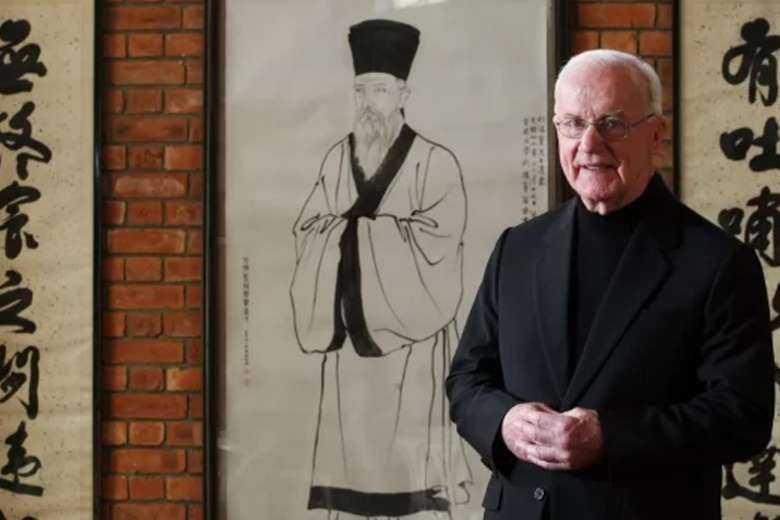 Jesuit Father Alfred Joseph Deignan served as a missionary in China for 65 years until his death in 2018. (Photo: Jesuits in Ireland)

The Deignan Award for Responsible Entrepreneurship is a collaboration between the Macau-based Ricci Institute and Woofoo Foundation of Hong Kong. The award will be given to SMEs from next year for good environmental, social, management and governance practices.

Macau’s Portuguese-language Catholic weekly Jornal O-Clarim reported on April 22 that a committee comprised of an expert panel will choose enterprises based on compliance, corporate governance, social responsibility and business ethics.

“The prize obviously presupposes that the candidates must be diligent and act in accordance with public policies,” said Father Stephan Rothlin, director of the Ricci Institute.

A key point is the ability to demonstrate that ethics and law are elevated to the status of key factors in business practices and are implemented at all levels in the company, the Jesuit priest said.

Father Rothlin says the award celebrates the great missionary life of Father Deignan, who served as a missionary in China for about 65 years until his death in Hong Kong in 2018 at the age of 91. He was the superior of the Jesuit mission in Hong Kong from 1996 to 2002.

He was hailed for educating successive generations of students with a particular focus on values such as integrity, honesty, forgiveness and human dignity

The priest was a pioneer in education and humanitarian activities to tackle HIV/AIDS in the former British colony.

Born in Mullagh in County Cavan of Ireland in 1927, Alfred Deignan entered a Jesuit novitiate in 1945. He moved to Hong Kong at the age of 25 when he was a Jesuit scholastic.

“It was such a complete change,” he said of arriving in Hong Kong after 28 days on board the RMS Carthage, according to Jesuits in Ireland website. “Everything was strange. It was my first time out of the country.”

Deignan’s knowledge of the world outside Ireland was very limited, according to the Irish Times. He quickly made up for this by two years of full-time learning of Cantonese, followed by a year’s teaching at the Jesuit Wah Yan College in Hong Kong.

He went back home to finish his studies and returned to Hong Kong after his priestly ordination in Ireland in 1959. Hong Kong eventually became Father Deignan’s adopted home and he excelled there as an educator.

He was hailed for educating successive generations of students with a particular focus on values such as integrity, honesty, forgiveness and human dignity.

Father Deignan also worked tirelessly to combat the rise of HIV/AIDS. He was a member of the Hong Kong Advisory Council on AIDS, member and vice-chairman of the Hong Kong AIDS Foundation, a member of the council of the AIDS Trust Fund, and chairman of an expert panel for HIV-infected healthcare workers. In 1993, he received the Governor’s Commendation for Community Service Award.

“I had the opportunity to work with Father Alfred Deignan over many years on different business ethics projects and I have always felt that the example of this deeply compassionate educator, with a huge passion for sharing the key values ​​of integrity, compassion and honesty left a significant mark in various circles of society,” Father Rothlin said.