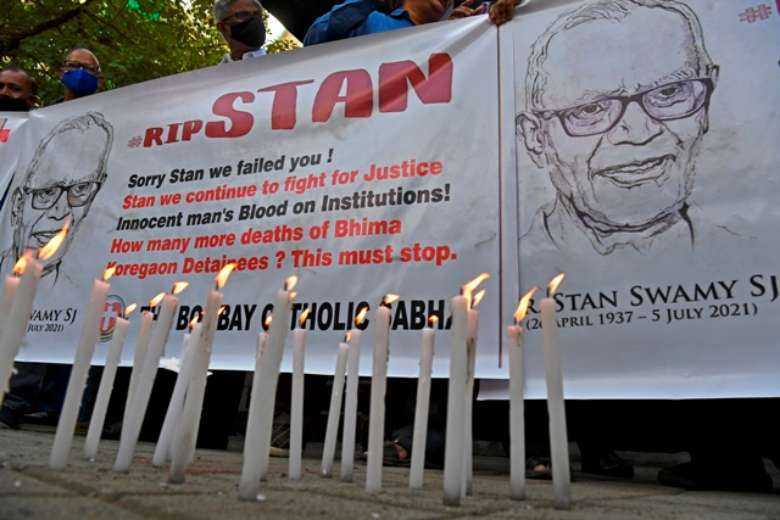 Eighty-four-year-old Father Swamy, who was arrested in the Bhima Koregaon case and died in custody in July 2021, was accorded the honor by the Martin Ennals Foundation based in Geneva, Switzerland.

Though the award was presented posthumously, the priest was chosen for it while he was still alive. “Father Stan was nominated for the award in spring 2021, but he sadly passed away before it could reach him,” said Hans Thoolen, chair of the award jury.

The jury wished to shine a light on the priest’s many contributions to human rights, which "cannot be eclipsed by his unjust incarceration by Indian authorities,” Thoolen added.

Father Xavier Soreng, a social activist and colleague of the late Jesuit, accepted the award in Geneva on June 2. Three other rights activists — Dr. Daouda Diallo from Burkina Faso, Pham Doan Trang from Vietnam and Abdul Hadi Al-Khawaja from Bahrain — were also honored.

Father Soreng narrated a brief life sketch of Father Swamy and his pioneering work for the welfare of the indigenous people of eastern India's Jharkhand state.

“The indigenous people were uprooted from their habitat for coal-mining projects without even paying them compensation. Those opposing to it were termed as [left-wing] Maoists or anti-nationals and put behind bars,” he said.

Father Swamy believed in educating tribal people, helping them raise their voices and defending themselves against their oppressors through democratic and legal means. “But still Father Swamy was arrested on Oct. 8, 2020, under a stringent anti-terror law and jailed,” recalled Father Soreng, who is also a Jesuit and rights activist in Jharkhand.

He described how Father Swamy, who suffered from Parkinson’s disease, was denied proper medical care in prison, causing his health to deteriorate. The High Court refused to grant him bail and it was too late when he was shifted to a hospital where he died on July 5, 2021.

“We are very happy that Father Stan Swamy is awarded this prestigious award for his selfless service to humanity,” said Archbishop Felix Toppo of Ranchi Archdiocese in Jharkhand.

The prelate told UCA News on June 3 that Father Swamy would serve as an inspiration to many in India and abroad.

“It is true Father Swamy became an irritant in the eyes of the pro-Hindu Bharatiya Janata Party for his stand against uprooting indigenous peoples from their habitats and had to pay with his life,” said Gulzar Singh Markam, an indigenous leader based in Madhya Pradesh state in central India.

The award recognizing human rights defenders who fight for freedom, justice and equality and against impunity in their communities and countries, often at great personal risk, is a global recognition of his dedicated service, he added.

Many belonging to the Catholic and other faith communities hailed the award as a real recognition of Father Swamy’s sacrifices during his five decades as a rights activist.