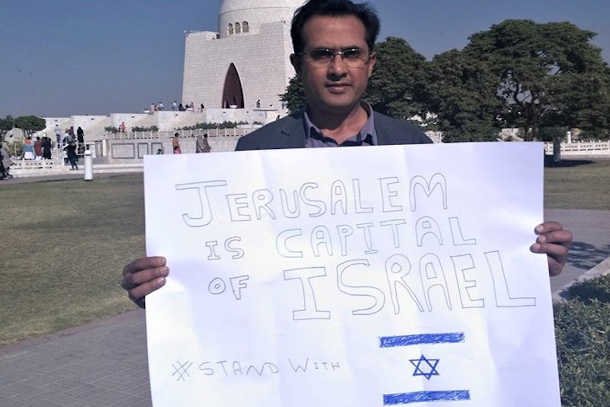 Fishel Benkhald, who regards himself as the "last Jew of Pakistan," says he wants to go to Israel on a pilgrimage despite Pakistani law prohibiting citizens from travelling to the Jewish state.

Writing in Lahore's Daily Times, Benkhald, who lives in Karachi, bemoaned "the widening divide" between Pakistan's Muslim majority and its religious minorities owing to the spread of a more militant and intolerant stream of Islamism across the violence-plagued nation.

He also expressed a desire to observe the Passover Seder next year in Jerusalem.

"I am stuck in a real-life conundrum," Benkhald, 31, wrote. "Being a practicing Jewish man, I want the freedom to perform my religious duties, a right granted to me and other minorities in the country by the constitution."

Yet despite that constitutional right, he is unable to practice his religion freely. "The reality is that my Pakistani passport states that 'this passport is valid for all countries of the world, except Israel,'" Benkhald said.

"All I simply want is to invoke my given constitutional right to perform a religious pilgrimage without having the threat of criminal persecution from the state of Pakistan hanging over my head. [There] is a flaw in the laws that govern the state of minorities in the country."

Like most predominantly Muslim nations, the Islamic Republic of Pakistan has refused to establish proper diplomatic ties with Israel out of solidarity with the Palestinians. Israel is routinely denounced by Pakistani politicians for committing human rights violations against Palestinians. The Jewish state has in turn accused Pakistan of supporting Palestinian terror groups.

Benkhald isn't the only Pakistani citizen who would like to travel to Israel. "Israel is the Holy Land. Our Lord lived and died there," a Pakistani Catholic asylum seeker in Bangkok who asked to remain anonymous told ucanews.com. "We would love to go there on a pilgrimage, but we can't go because of the political situation. In Pakistan, many people hate Jews and hate Israel."

According to official estimates by the Pakistani government, several hundred families registered as Jewish continue to live in the country, the remainders of a once 2,500-strong expatriate community that inhabited what would become Pakistan during the final years of the British Raj.

Benkhald disputes those figures, however. He argues that at most only a handful of people who identify as Jewish in some form remain in the country.

Ironically, one of his brothers has openly disputed that Benkhald himself is Jewish, telling a Pakistani newspaper that there was no evidence their late mother, who Benkhald says was Jewish, did have Jewish ancestry.

Benkhald was originally registered as a Muslim because his father was Muslim. Three years ago, however, he underwent a months-long bureaucratic struggle to reregister himself officially as a Jew. He also changed his original Muslim name, Faisal Khalid, by adopting a new name.

"[People's] attitude toward me changed completely after I got myself registered as a Jew," he told a German news agency. "Even my four brothers disowned me and declared me an apostate."

Religious minorities, including Christians and Hindus, face various forms of discrimination in Pakistan. They are regularly overlooked for better-paying jobs and hundreds have been executed or sentenced to long prison terms for violating strict blasphemy laws.

"Pakistan is one of the worst countries to live in as a member of a religious minority group due to the lack of human rights protection accorded to minority communities," noted the Oxford Human Rights Hub, a publication by the University of Oxford's faculty of law. "Recent years have seen an intensification of violent persecution of religious minorities."

Religious minorities regularly have their places of worship targeted by Islamist militants. Occasionally Christians, Hindus and other minorities are lynched by enraged mobs for allegedly insulting Islam or Muslims.

Benkhald, who is a vocal advocate for minority rights and spearheads a one-man campaign to preserve an old Jewish cemetery in Karachi, said he has experienced various forms of discrimination. "When my landlord learned about my Jewish identity, he asked me to vacate the apartment where I had been living for months," he was quoted as saying.

In 2015, he was attacked by a mob of Muslim men who took issue with some of the views he expressed on Twitter. The men began kicking and punching him before police intervened and took him away. Benkhald managed to record some of the attack on his mobile phone.

Yet despite such harassment, Benkhald, who calls himself a "guerrillativist" on Twitter, said he will continue to speak out for his rights and those of other religious minorities in Pakistan. "Why should I hide? It's my right as per the constitution, so I will do it publicly and I will do it loudly," he said.