But families with smaller numbers have been selling surplus food 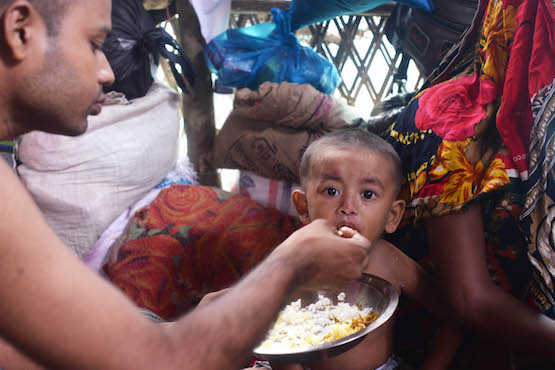 A Rohingya father feeds his child in Kutupalong refugee camp at Cox’s Bazar on Sept. 28. (Photo by Piyas Biswas/ucanews.com)

Large Rohingya families living in overcrowded refugee camps in Bangladesh are struggling with hunger with many saying they are not receiving enough food aid.

Abdur Razzak, 60, head of an extended family from Balukhali refugee camp in Cox's Bazar told ucanews.com that his family's food supply from the World Food Program (WFP) is inadequate.

"Every two weeks, my family gets 15 kilograms of rice, two kilograms of lentils and two liters of oil per card provided by WFP," said Razzak referring to one of the two ration cards he was given.

"We are 18 people in the family and 60 kilograms of rice is not enough for us for a month," he said.

"When the food stock runs out, we rely on the mercy of relatives and local people who sometimes donate money and food. Otherwise, we face starvation."

Razzak and his family arrived at the camp from the township of Buthidaung in Rakhine State of Myanmar during the first week of September. They are among the 600,000 Rohingya who fled to Bangladesh following the Myanmar military's operations in the north of the state responding to the Aug. 25 Rohingya insurgent attacks on security checkpoints. The ensuing military operations and actions by Rakhine mobs have been described as textbook examples of ethnic cleansing by the United Nations.

Bangladeshi government and aid groups have been struggling to cope with the massive humanitarian crisis triggered by such a huge influx.

Jarina Begum, 45, a mother of eight, has been living in Kutupalong camp since arriving from Maungdaw in Rakhine early September after the military killed her husband.

As with Razzak, she similarly said food aid is not enough for her family.

"We are nine people and we get 15 kilograms of rice and some other items for two weeks, but it's is not enough. When food runs out the children cry and I feel very sad," Jarina told ucanews.com.

"But I have no money, so I have no option but to starve and wait for the next round of food aid."

According to RFA, Rohingya families receive the same WFP ration no matter the size of their family and that families with smaller numbers have been selling surplus food.

Abdul Aziz, a local journalist in Cox's Bazar who has been covering the crisis more than two months, confirmed that smaller Rohingya families have been selling surplus food to buy other items.

"Many smaller refugee families have been selling relief supplies — rice and lentils — in the local market for half of the original prices," Aziz told ucanews.com.

"They sell their excess food stock to buy other daily essentials like vegetables that they don't get from aid groups," he said. A Rohingya child has his meal at Balukhali refugee camp at Cox's Bazar on Sept. 10. (Photo by Piyas Biswas/ucanews.com)

Caritas Bangladesh, the Catholic Church's social service agency, has been supplying food and non-food items to about 70,000 refugees for the past two months.

"As far as I know, WFP has been coordinating with aid groups for effective food distribution among all refugees and the military has been helping to keep the order at distribution points," Rozario told ucanews.com.

"We have heard of food crisis but we must look at it if the refugees have complained," he said.

"We are not aware about food crisis or shortage, but since the issue has surfaced, we must put it on the agenda in the next coordination meeting," said Kalam.

"In addition to increasing the amount, we might also need to increase the number of items as well," he added.

The United Nations Refugee Agency has been coordinating humanitarian response from international and local aid groups, while the government has been helping registering refugees, providing security and necessary paperwork for construction of campsite, water supply, latrines and sewerage lines.