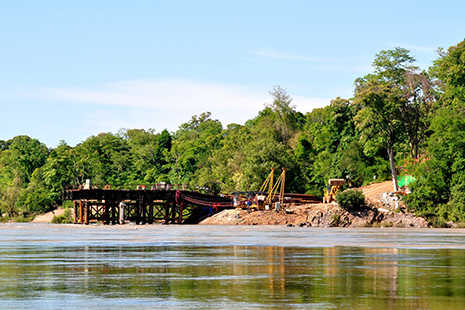 A bridge is being constructed to connect the mainland to Don Sadam Island to facilitate work on the Hou Sahong Channel (Photo: International Rivers)

By Will Baxter, Bangkok

Laos is proceeding with construction at the site of the controversial Don Sahong Dam despite opposition from neighboring governments and ongoing calls for a delay period and regional consultation, an environmental group revealed today.

A visit to the site earlier this month by International Rivers (IR) confirmed fears that the Don Sahong project is following “the same dangerous trajectory” taken with the Xayaburi Dam in Laos, with construction work on infrastructure taking place before neighboring countries have had a chance to undergo prior consultation, before impact assessments are finalized, and before the project’s far reaching impacts in the Mekong region are understood, according to a press release from IR.

"Continued construction towards the Don Sahong Dam is an unwelcome déjà vu for Mekong communities and governments as Laos continues to move forward unilaterally with decisions which threaten the entire region," said Pianporn Deetes, Thailand Campaign Coordinator for IR.

"The risks go well beyond the borders of Laos. The Don Sahong Dam will irreversibly impact livelihoods and food security throughout the Mekong. Yet Laos remains unwilling to respect the requests of neighboring countries for construction to halt while trans-boundary impact studies and further consultation can be carried out," she said.

Don Sahong villagers were informed last November that they would be resettled to make way for the dam, but have been given no further information regarding the move. Fishing has also been banned on the Hou Xang Pheuak Channel to allow Mega First Corporation, a Malaysian company, to work on creating a fish passage, but no compensation or alternative source of income has been provided for families whose livelihoods had depended on fish from the river, according to IR.

Vietnam, Cambodia and Thailand — the other three members of the Mekong River Commission (MRC) — have clearly stated that the Don Sahong Dam must undergo prior consultation, as required under the 1995 Mekong Agreement, to which Laos is a signatory.

The three countries have submitted letters to the Lao government and also reiterated their requests at a special MRC meeting in January. At the 2nd Mekong Summit in Ho Chi Minh City in April, Vietnam and Cambodia strengthened their objections by calling on Laos to halt all construction of dams on the Mekong mainstream for a 10-year period until further studies could be completed.

Te Navuth, Secretary General of the Cambodia National Mekong Committee, said yesterday via email that "Laos has rejected the request from other MRC member states...and has claimed that the construction will start by the end of 2014".

"This is already a violation of the 1995 Mekong Agreement," he said, adding that Laos should “halt the project and...start with a consultation process with the MRC member countries”.

Cambodia has also voiced concerns regarding "the possible impact of this Don Sahong project" downstream, including damage to livelihoods, and has urged Laos to "further extend the assessment” to include a trans-boundary Environmental Impact Assessment in Cambodia, said Navuth.

“Under international law, downstream countries are entitled to robust consultation,” said Ame Trandem, Southeast Asia Program Director for IR. “It’s time for Laos to respect the rights of its neighboring countries by accepting a 10-year deferment period and allowing for joint decision making based on science and consultation over the future of the shared Mekong."

“The MRC Member Countries couldn’t reach a conclusion on a process for the Don Sahong Project, which was discussed at the MRC Joint Committee meeting in January," said Surasak Glahan, a spokesman for the MRC Secretariat, via email. “The four countries had divergent views on the process for the project and agreed that the issue be discussed and decided by the MRC Council."

The Council is scheduled to meet on June 26 and will issue a press release on the outcome of the discussion, he added.