Describing his three years in jail he says it was Jesus Christ, not him, who was behind bars 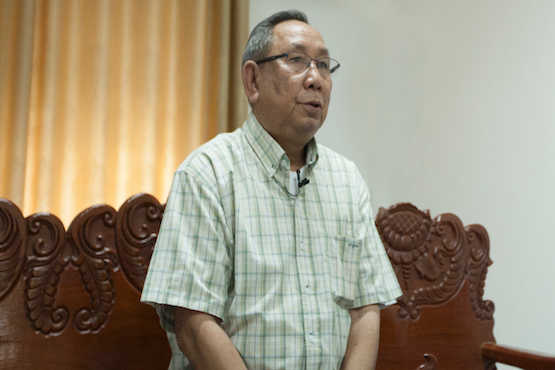 In the Cathedral of the Sacred Heart in Vientiane a large banner is hard to miss.

The "17 Martyrs of Laos" banner hangs from the ceiling of Vientiane's only Catholic church and commemorates a group of Catholics, including several priests, who died between 1954 and 1970 in a crackdown on the religious by the communist government.

Each year, on Dec. 16, Louis-Marie Ling Mangkhanekhoun, 73, makes sure that the martyrs are not forgotten. "We remember them with a ceremony, because they were a witness to the faith," Ling said inside the cathedral.

Ling, who grew up in a poor family without a father and was raised with the Khmu ethnic minority in Laos' mountainous Xiengkhouang province, can also be described as a "witness to the faith." Ling, who became the first cardinal of Laos on June 28, was sent to prison in 1984. Not for committing a crime, but because of his work as a priest traveling around the country.

He spent three years behind bars. But the cardinal sees the jail time as a spiritual experience during which his faith was tested. "There were some difficulties when I was locked up, health difficulties for example," he says. "But it didn't trouble me a lot. It didn't disturb me in my personal life. Because we can take it as a test; where is your faith?"

Cardinal for a weak church

The appointment of Cardinal Ling, who studied theology and philosophy in Canada, came as a surprise to many. Including the man himself, who was in the small southern Laotian city of Pakse – where he serves as a bishop – when he heard the news.

"I was walking around when somebody called me, and said: 'grandfather, you are selected as a cardinal'. I said 'no, this is not a time to joke', because I didn't believe it," he says laughing. "Then it was confirmed, and I had to go to Rome."

Becoming a cardinal was so unreal that he never even dreamed about the possibility, let alone discuss it with others. After all, Laos is a small country with a small Catholic community. It was in a meeting with Pope Francis when the reason behind the appointment became clear to him. "The pope said 'the power of the church is in the small and in the weak church. Because they are really inside the church. They are always challenged to believe.' So when you are in a special situation, you have to be watchful and realistic. That makes you awake. And you know, Jesus Christ came to save the world. He accepted the sacrifice of his life. We have to follow Christ. That's not only theoretical or philosophical. You have to put that in your heart and body."

There are an estimated 45,000 Catholics in Laos, according to a 2007 US government report on international religious freedom. But Cardinal Ling believes the true number is closer to 50-60,000, as the Lao Catholic population has grown slowly but steadily. Some live in the main cities along the Mekong river. Others live in remote areas, often with no church nearby.

"In the mountainous area of Xiengkhouang, for example, the church has been destroyed. But there are still some faithful Catholic people over there," the cardinal says.

In the entire country, there are only four bishops and 20 priests. But the low number doesn't bother Cardinal Ling too much. "For me it's not the number of priests that count, but the quality. We have to do our best to make them qualified as a priest. And even with nothing we can still do something."

What's most important is that the Laotian Catholic community has strong unity, the cardinal points out repeatedly.

It's necessary in a country where the government is deeply suspicious about Christianity. Especially in the northern provinces where people have a hard time practicing their faith. The communist government, which has ruled Laos as a one-party state since 1975, sees the Catholic community as a threat to the country's stability.

Cardinal Ling believes this suspicion is unnecessary."We are as Laotian as all the people in Laos. That shouldn't be a problem. But sometimes we have to explain to them how we practice our faith. We have the freedom to practice it under the constitution. But do they understand exactly what that means?"

For Cardinal Ling the lack of understanding on the government side resulted in spending three years in prison. But the cardinal believes it wasn't him behind bars but Jesus Christ. "The time I stayed in jail, it wasn't me, it was him, Jesus Christ. So I was free. Because you can't stop the freedom inside yourself."

Reaching out to different faiths

Shortly after becoming a cardinal, he approached local authorities for a talk. He invited them to join an upcoming celebration in the church. Such meetings are necessary to create mutual understanding, Cardinal Ling says.

"To understand and to be understood, we have to be in close contact and really need to have a dialogue. Whether you are Catholic or not, we are all Laotian. And all of us are children of God. We don't have to make trouble for each other. Our function here is to be a peacemaker."

The cardinal sees it as his task to unite different faiths and beliefs.

"I really would like us, the church, and the other religions, to understand each other", he says of the predominantly Buddhist country. "Because that brings unity to the country. United we can build a powerful force, we can help each other to build the country."

"I only say, be sincere to yourself. You believe what you believe. But please be sincere, and try to do the best thing. Because the name of God,  it can be Allah, it can be Manitou, it can be Buddha. Those are the names we gave him. But lord God the creator is higher than that."

The Buddhists may be the large majority in this small Asian country of 6.7 million people, but in the eyes of Cardinal Ling they are no different to Catholics. "I think we are similar. We are all equal."