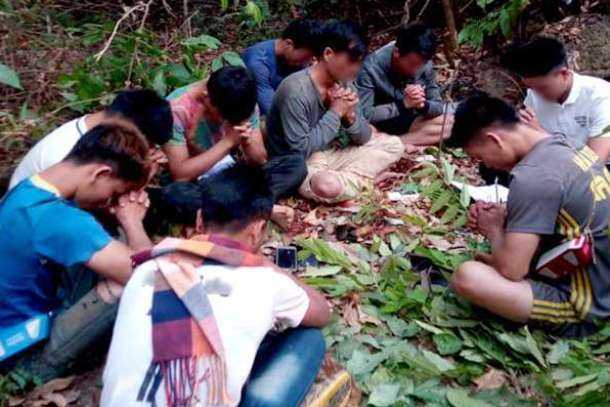 Villagers in the Lao province of Salavan forced seven Christians from their homes and sent them fleeing into a nearby forest after they refused to renounce their faith, reports say.

The Christians, who were expelled last week, were living without enough food and basic amenities in a small makeshift hut in the forest, media reports said.

“Their family members are too scared [to help them] and fear they too will be thrown out of their homes if they dare to provide any help,” a local villager told a foreign news agency.

“They have no food or clothing and do not know where to turn for help,” the villager was quoted as saying. “The village authorities will not allow relatives or other people to help them.”

The case is the latest in a series of reported acts of discrimination directed at Christians in the predominantly Buddhist nation ruled by an oppressive communist regime.

Christians account for around 2 percent of Laos’ 7 million people. But according to various reports by foreign Christian groups, most Christians face social discrimination in different forms, especially in villages.

The law allows Christians to practice their faith with some restrictions. But in reality, they are frequently harassed and denied basic rights by some officials and villagers who consider them to be following a foreign faith.

“To be a Christian in Laos is seen as a betrayal of the community,” notes Open Doors International, which supports persecuted Christians worldwide.

“[Laotians] who choose to follow Jesus are not only rejected by their village and family, but are heavily monitored or, in extreme cases, detained by authorities,” the group said.

This year, several Christians were arrested for holding prayer services, accusing them of breaking local norms. Gatherings are banned as part of measures to check the spread of Covid-19.

Christians who are jailed are often held indefinitely without proper legal representation. They are routinely subjected to “re-education” sessions to force them to renounce their faith, according to foreign Christian groups who have been monitoring the plight of Christians in Laos.

Christians are also denied basic government services, such as help during floods and droughts.

This year, 13 Christian villagers were refused help during a prolonged drought, according to Christian Aid Mission, which provides aid for persecuted Christians.

“Local officials tried to force them to sign confessions and leave the village — twice — which they refused to do because they had nowhere to go,” the aid group reported.

“The government wants to give special assistance to the people, but the village headman did not give any to the Christians,” a local Christian told Christian Aid Mission. “They are waiting until they renounce their faith.”

In the face of constant harassment, many Christians around Laos practice their faith in secret, rights groups say.