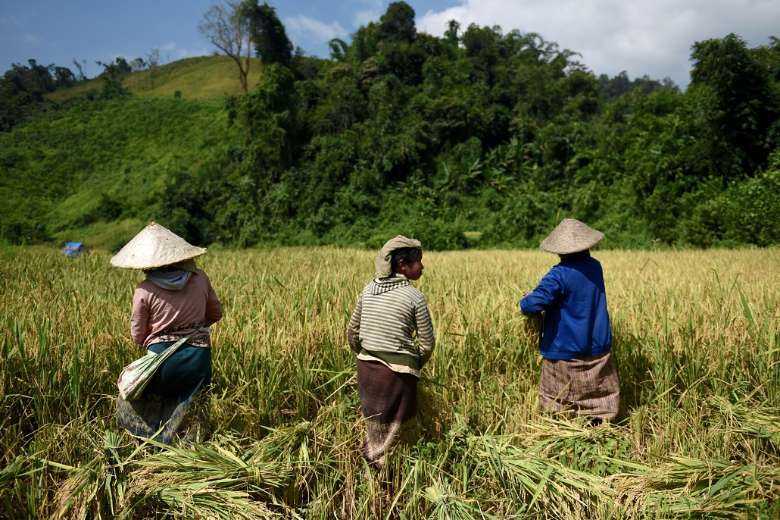 Take a tour around Laos, a scenic country of rolling hills and jagged mountains, and you will encounter photogenic scenes frequently featured in tourist brochures about the country: villagers working in their rice paddies and smiling happily back at camera-toting foreigners.

Yet not all is well when it comes to such traditional ways of village life in the communist holdout of 7 million. Their loss of farmland is causing numerous substance farmers in rural Laos to abandon agriculture and migrate to urban areas to find work, according to experts and media reports.

Laos’ mountainous topography leaves relatively little land for agriculture, while large-scale redevelopment projects by the Lao Communist Party have left many villagers without any farmland to cultivate.

In addition, many farmers are facing a case of diminishing returns on their crops as a result of market forces, which makes traditional rice cultivation less appealing to them.

“Many farmers in our province don’t want to do farm work anymore,” a farmer in Vientiane province told Radio Free Asia’s Lao Service.

“And more specifically, they don’t want to grow rice. Most of our young people are now going to the capital Vientiane to work as laborers.”

Most of the young men have gone to work in Thailand, with some also going to cities like Vientiane

In some villagers only the older people are left to cultivate small plots of land.

“The residents of my village have all scattered during the last 10 years,” observed a former rice farmer in the southern province of Savannakhet province who now works in Thailand.

“Most of the young men have gone to work in Thailand, with some also going to cities like Vientiane. Only a small number of the older folks have stayed in the village to grow rice.”

In recent years numerous villagers have also been uprooted by redevelopment projects undertaken by the country’s communist regime, which has embarked on several large-scale infrastructure projects, including a Chinese high-speed railway through the country connecting Luang Nam Tha province on the border with China to the capital Vientiane, which lies right next to Thailand.

The plan is to link up the landlocked country with seaports and larger markets in its more prosperous neighbors, which could bring a degree of relative prosperity to one of Asia’s poorest nations. Yet land redevelopment has often come at the expense of villagers whose homes and farmlands have stood in the way of new infrastructure projects.

Many villagers have lost their ancestral farmland to hydroelectric plants, which have been mushrooming around the country as its communist regime wants to turn Laos into “the battery of Asia” by exporting electricity to its neighbors, particularly China and Thailand.

Many displaced and dispossessed villagers have yet to be compensated, or else they might have to wait long years before receiving any money. And any local who speaks out against rapacious and unfair government policies risks being arrested and jailed, which has meant that infrastructure projects of dubious worth have gone unchallenged inside the country.

“Before, I grew rice for a living,” a villager in Oudomxay province in northern Laos told RFA. “But I lost 1.5 hectares of rice field to the Laos-China high-speed railway project.”

Yet the loss of their farmland to redevelopment is just one of the reasons why more and more Laotian farmers in small villages around the impoverished hinterland are abandoning their ancestral ways of living. Trapped in a hand-to-mouth existence of subsistence farming, many villagers despair of their long-term prospects and gravitate towards urban centers to try their luck.

The rising prices of fertilizers and other necessaries are adding further impetus to their decision to pack up and move.

If you work hard and save money by living frugally, after a few years you can earn enough to build a nicer house back home

A decade ago, as many as 77 percent of Laos’ 7 million residents lived from farming, according to government statistics. Today the figure is 69 percent. In another decade, the percentage of farmers in Laos will likely be a lot lower still.

That in itself may not necessarily be a problem as urbanization is a relentless force nearly everywhere around the planet. However, most Lao villagers lack proper skills and have low levels of educational attainment, which means they have little choice but to take low-paying menial jobs. Many young Laotians are also at risk of being trafficked into the sex trade in China and Thailand.

Tens of thousands of Laotian farmers have migrated to neighboring Thailand, where they find work as maids, cleaners and constriction workers toiling away in often grueling conditions.

Yet for many of them, even hard work in Thailand is preferable to staying home.

“If you work hard and save money by living frugally, after a few years you can earn enough to build a nicer house back home,” a 27-year-old Lao woman who works at a construction site in central Bangkok told UCA News.

“I miss my family a lot, but they know I could not make enough money if I had stayed home.”