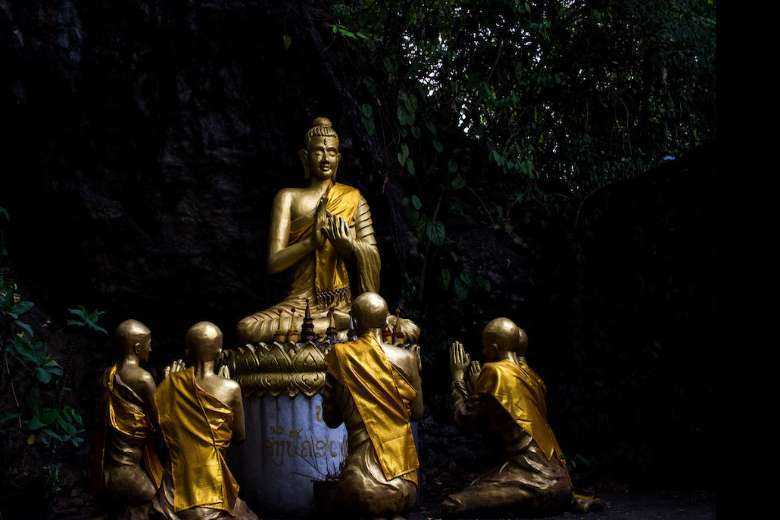 A Buddha statue in northern Laos, in the peaceful city of Luang Prabang. The city has prospered for centuries within the peninsula formed by the confluence of the Mekong River and the Nam Khan River. Its colonial architecture and majestic temples have earned it a UNESCO World Heritage Site since 1995.
Legend has it that Buddha came here during one of his journeys. (Hans Lucas via AFP)

Buddhist monks and citizens in Laos are opposing a plan to build a Chinese-style Buddha statue in the capital Vientiane terming it a “cultural encroachment” from its largest foreign investor and aid provider, China.

The opposition to the statue has been brewing since China's Wan Feng Shanghai Real Estate Company announced a plan to build the Buddha in the That Luang Marsh Special Economic Zone (SEZ) in Vientiane, according to Lao and Chinese state-run media.

The opponents alleged that the planned statue is unacceptable as it is to be erected in Mahayana-style, Chinese Buddha wearing long frock and standing. In Laos, Theravada-style Buddha sitting in a meditative pose is a common feature.

Mahayana and Theravada are two major schools of Buddhism and Buddhist culture.

“If they built it in the Chinese style, it will draw a lot of negative reactions from the public,” said a resident from capital Vientiane, who declined to give his name, RFA reported. “With a Chinese-style Buddha, Laos will lose its image and its identity. The Buddha statue should be Lao because it’s in Laos.”

State media in Laos reported in November 2016 that the company planned to build a water theme park including a giant Buddha statue at the SEZ to attract tourists. The company is to invest US$ 80 million for purpose.

The Chinese real estate developer has been entitled 99-year lease on the 365-hectare SEZ since 2012.

China exerts significant influence in Laos thanks to the long-running strategic partnership between two Communist nations. With an estimated US$ 16 billion in investments and ambitious plans in transportation infrastructure, economic zone, hydro-power dams, schools and the military, China is Laos’ largest foreign investor, according to a report in the Diplomat.

Yet, anger has been simmering against the Chinese-style Buddha statue, which Laotians say, threatens their culture and identity.

Before the proposed Buddha statue is allowed for construction the government should take public opinion into consideration, a resident in Vientiane told RFA.

“They should build a Lao Buddha, or if they want to build it as a symbol of the cooperation between two countries, then they can build two Buddha statues — a Chinese one and a Lao one side by side,” he said.

“They can’t just build only the Chinese one. Laos will lose its image or face.”

“Personally, I don’t want to see a Chinese Buddha statue in the SEZ in the heart of the capital Vientiane,” said a Buddhist monk.

Laotians in other areas of the country have also opposed the statue.

The statue should be built in the authentic ancient Lao style, says a resident from Luang Prabang province.

Even senior government officials have stressed the importance of promoting Lao culture and tradition.

During a national meeting on Aug. 31, Kikeo Khaykhamphithoun, deputy Prime Minister of Lao, commented that the project in the SEZ should promote Lao culture, history, tradition, religion, architecture, and business, including tourism.

Media reports say this is not the first case of Laotians opposing Chinese cultural traits.

In November 2020, a Chinese company was forced to take down red Chinese lanterns and balloons on utility poles that the company installed in Vientiane after many Lao residents complained against them.

Laos is a Southeast Asian landlocked Buddhist-majority country of 7 million where Christians account for two percent of the population.