Clearing Cambodia's landmines is a deadly serious business, but an end is in sight and there is even time for fun. 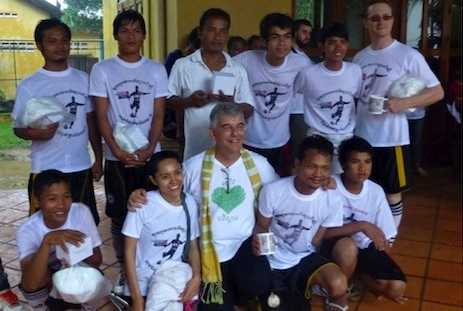 The London Olympics were in full swing on Aug. 5, but in Battambang, Cambodia, on the other side of the world, the Oslo Cup pitted four soccer (or football, as it's called in Cambodia) teams against each other. The winners? Team Landmine and Cluster Munitions Survivors. It was an awesome match, worthy of the Olympic ideals of excellence, respect and friendship. The match finished in drenching rain, stretching into overtime. Among the heroes was one young man who used his head instead of the arms he had lost in a landmine accident to shoot a goal. The tournament took place on the sprawling grounds of the Catholic Church in Battambang. Jesuit priest Father Enrique Figaredo (known as Father Kike) is the Apostolic Prefect there. He has worked in Cambodia almost non-stop since 1985. He works closely with the Jesuit Refugee Service, Cambodia, which has a long, distinguished track record. Jesuits were among the first foreigners to return to Cambodia from the refugee camps on the Thai border after the brutal years of killing under the Khmer Rouge and its aftermath. The Jesuit Service Cambodia has been and remains a leader in the International Campaign to ban landmines and cluster munitions. Indeed, the Nobel Peace Prize that was awarded to the Campaign lives at the Metta Karuna Reflection Center in Siem Reap. Oslo was the name and motif for the tournament because of the upcoming meeting in Norway on cluster munitions in September. The idea was to raise awareness and encourage the Cambodian government to sign on formally to the Convention (it has expressed support but not yet signed officially). The Convention was signed in Dublin in 2008 and came into effect in August 2010. Cluster munitions and landmines are brutal reminders of the horrors of war. U.S. bombing and the U.S. invasion of Cambodia happened more than 40 years ago but the cluster munitions that were dropped then still explode and people, especially children, lose eyes, limbs and lives. After intense clearing and education campaigns, landmine accidents are far less common today than they were. Indeed, an Italian supported hospital in Battambang whose specialty was treating landmine victims came close to shutting down early this year because there are "only" four or so cases a week (the good news is that Japanese philanthropist Haruhisa Handa stepped in and the hospital is being converted into an emergency treatment facility). Full Story: A Soccer Match Against Cluster Munitions and LandminesSource:Berkley CenterSee also: Photo gallery: Help for Cambodia's landmine victims