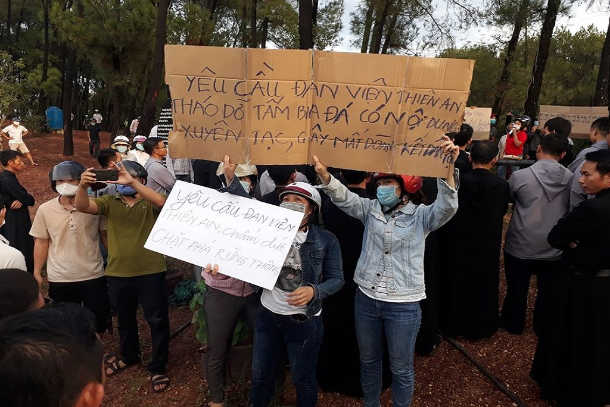 Government-led land grabbers in central Vietnam have stepped up their campaign of harassment of members of a Benedictine monastery.

Brother Son said they shouted abuse and raised placards accusing the monks of stealing their land and demanding the monastery return the land.

They claimed they were given the land including the hill and surrounding pine forest by Tien Phong forestry company.

The monk said thugs threw stones at Benedictine Father Anthony Vo Van Giao and other monks and swore at them.

“They are angry with the monks who have prevented them from cutting pine trees and replacing them with eucalyptus trees so as to encroach on the monastery’s land,” he said, adding that the monks asked them to show ownership documents but they failed to do so.

Some thugs took photos and videos of monks who were reciting the rosary by an iron cross on the ground. A crowd of assailants broke the crucified statue on the cross and uprooted the cross in 2017.

The crowd also demanded the monks remove a big stele bearing a description of authorities and thugs brutally attacking the cross and monks in 2017.

Local authorities and land grabbers have intensified their campaign to forcibly confiscate the land from the monastery in order to sell it to tourism companies after the provincial government decided to rebuild Thuy Tien Lake, a destination abandoned for a decade by a state-run company. The government has confiscated the lake, which provided water to the monastery, and surrounding pine forests.

Brother Son said the attackers had threatened to return to the monastery the following afternoon, but they did not turn up as it rained heavily.

“We really want to live in peace to follow our vocation — praying and laboring on the land we have cultivated since 1940 — but the authorities treat us unfairly,” he said.

Last month state-backed thugs went on the rampage by breaking the monks’ farm tools and threatening to kill them.

Paul Le Quoc Thuong, a local Catholic, said he visited the Cross Hill and prayed to God to protect the monks, referring to them as victims of injustice.

Thuong condemned the land grabbers for violating health measures to stem the Covid-19 pandemic. The provincial government has banned all people from gathering at public places.

“I pray for the government to respect the truth and the monks’ property,” he said.

The disputed area is part of 107 hectares of forest that the Benedictines planted in 1940. After 1975, the communist government "borrowed" 57 hectares of land from the monastery and assigned it to Tien Phong forestry company.

In 2000, the government confiscated much of the remaining land and assigned it to a tourism company. However, the government allowed the Benedictines to keep six hectares, including the monastery in the disputed area.

In recent years, many officials and people have built houses on  monastery land, while thugs have set fire to pine forests, destroyed the monks’ property and crops as well as assaulted the monks.