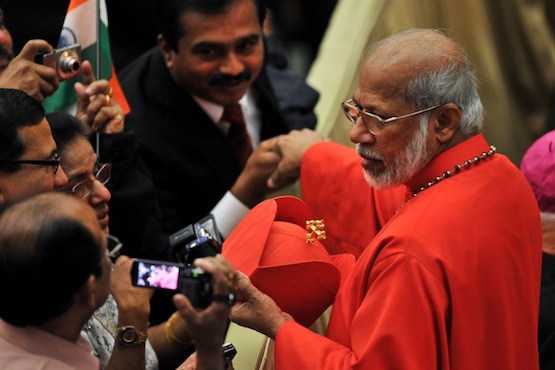 A file image of Indian Cardinal George Alencherry (R), holding his biretta's hat after arriving in Aula Paolo VI at the Vatican in early 2012. (Photo by Andreas Solaro/AFP)

Priests from the Syro-Malabar Church in India have accused Cardinal George Alencherry, its major archbishop, of hiding the truth about liabilities of nearly US$13 million from land deals.

In a series of transactions over the past two years, the cardinal's Ernakulam-Angamaly Archdiocese has incurred a liability of about 800 million Indian rupees (US$12.5 million) in terms of missing money and bank loans, an official statement shows.

The presbyteral council, a canonical representative body of priests, holds two senior priests and Cardinal Alencherry responsible for the deals, which they say bypassed canonical bodies and financial advisors in the archdiocese.

"We have lost money. How the cardinal signed all those deeds, and how this slip-up happened, is a big worry for all," Father Paul Karedan, spokesman for the archdiocese, told ucanews.com on Feb. 6.

The priests' council sent a report about the situation to the Vatican last week, the priest confirmed.

"That does not mean they are seeking Vatican intervention. It is only proper that the Vatican knows about the issue from the original source rather than from the media," he said.

The media began to speculate about corruption, black money and a move to unseat the cardinal about two months ago, forcing Auxiliary Bishop Sebastian Adayanthrath to issue a circular on Dec. 28 admitting a "financial crisis" in the archdiocese.

The circular conceded that several plots of lands in prime locations in and around Kochi, the business capital of southern Kerala state, were sold to pay off a 600-million-rupee bank loan that was taken to buy another plot of land.

One of the two accused priests, who does not want to be named, told ucanews.com that the allegations ignore the basic intention of these deals.

"It was to pay off a bank loan that was accumulating monthly interest. If money had come in time, no one would have complained," he said.

"No money has been lost. It is just delayed. It will come and all will be freed from accusations."

The priest admitted that a middle man received some money from buyers.

The circular said that while about US$3 million is missing, the liability of close to US$10 million comprises bank loans and accumulated interest over the past two years.

"What happened in the archdiocese is not only a financial crisis but also a moral lapse," the auxiliary bishop's circular said. Lack of transparency and violation of canonical norms are "serious ethical concerns," it said.

"The archdiocese may recover from the financial crisis to a great extent, but ethical issues will prevail."

Father Karedan, the archdiocese spokesman, said Cardinal Alencherry has agreed to explain the circumstances that led to the ethical issues in the next meeting of priests, which will be convened in the next 10 days.

"He has promised to explain and answer all these concerns to his priests. Let us wait for it," Father Karedan said.

But a senior priest and member of the presbyteral council told ucanews.com that this "time buying means nothing" as the issue has been under discussion for more than 18 months. The council has been convened several times with the promise of an explanation from the cardinal. "But we have had no explanation yet," he said.

"The deafening silence of the cardinal pains us all. None of us has ever said that our cardinal or our priests have taken money. We are ready to suffer the loss. But we have a right to know what happened to our assets, how it happened and where the money has gone," said the priest.

As the controversy spins around 74-year-old Cardinal Alencherry, who heads the second largest Eastern rite church in the Catholic world after the Ukrainian church, it has become a concern for 4 million people in the ancient church, which traces its origin to St. Thomas the Apostle, who according to tradition preached in India. The Catholic Church in India comprises Latin, Syro-Malabar and Syro-Malankara rites.

"It is a serious issue for the church," said one of the bishops who attended a Jan. 8-13 gathering of all 59 active bishops of the church. The synod spent several sessions discussing it, he said.

The synod, the supreme decision-making body of the church in all matters, sought to solve the issue but failed, he said without giving details. "Technically, it is an issue within an archdiocese, and we believe it will be amicably settled very soon," he said.

The synod is "helpless in this matter," said another senior priest on the presbyteral council. Although it elects the major archbishop, it has no powers to act against or discipline him. "That's why we want the Vatican to know about these developments," he said.

Lay activist Reji Njallani, who leads the Open Church Movement to fight injustices in the church, said the allegations against the cardinal stemmed from "a factional feud within the church, which has even divided bishops, based on a liturgical dispute."

Factionalism once divided the church between modernity and traditionalism. The cardinal, who was a bishop supporting the traditionalist faction, was elected to lead the church in 2011. Ernakulam-Angamaly priests and some bishops who support modernism do not want him in the top office, Njallani said.

The Vatican has been considering granting patriarchate status for the church, and those opposing the cardinal do not want to see him becoming patriarch, he added.

Njallani's arguments were not supported by priests or bishops, including some who were involved in the factional fight three decades ago.

"Nothing can be more absurd than bringing in an old dispute here," said a senior priest. "None of our priests have said a word against the cardinal or would defy his orders. We would be the happiest people if this painful row is settled in some way."