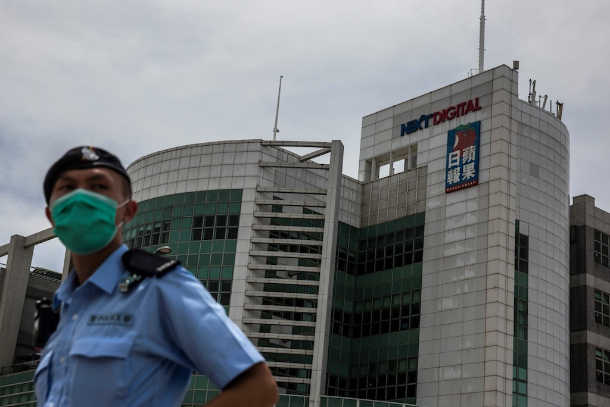 Police cordon off the area outside the Next Media publishing offices as authorities conduct a search of the premises after the company's founder Jimmy Lai was arrested under the new national security law in Hong Kong on Aug. 10. (Photo: AFP)

There was some excitement in Hong Kong’s under-pressure independent media on Aug. 7 when it came to light that Catholic education authorities had urged schools to follow nationalistic new practices introduced on the back of tough new national security legislation.

But this seemed to have buried the real story — the short and medium-term future of the Catholic Church in Hong Kong.

Catholic schools will of course have to comply with Beijing’s new laws. After all, Catholic schools in Hong Kong largely offer government-funded services to parents and their students. As such, they are bound by the same rules that apply across the system.

But the mere fact that Catholic authorities felt the need to publicly express their keenness to fall in line with the new laws says an abundance about growing uncertainty in the Hong Kong Church about China’s plans for the diocese at the highest levels.

This is of course a very Chinese way of trying to head off any further moves by the Chinese Communist Party (CCP) to signal compliance when, in fact, it does not mean any real changes at all apart from an acknowledgement of new rules. So, the leadership of the CCP in Hong Kong is now acknowledged by the Church there.

Still, this is hardly the first time the Church — not just in Hong Kong but also the Vatican itself — has pandered to the CCP over Hong Kong in its attempts to head off its own version of Armageddon: the introduction of the state-run Chinese Catholic Patriotic Association (CCPA) into the diocese.

This was most clearly demonstrated by the leaked and unconfirmed news that Auxiliary Bishop Joseph Ha Chi-shing, a critic of Beijing, freedom activist and supporter of last year’s street protests, has been passed over to succeed the late Michael Yeung Ming-cheung as bishop of Hong Kong. Instead, Rev. Peter Choy Wai-man, who is decidedly pro-Beijing, is expected to be handed the job.

Despite predictions by conservative Catholic media in January of an imminent announcement on the new bishop, nothing has happened so far. There are many possible reasons for this but one may be the outlying status of the dioceses of Hong Kong and Macau in terms of China amid ongoing discussions between Beijing and the Vatican about a new deal on the appointment of bishops.

Hong Kong is technically a suffragan diocese to the mainland Archdiocese of Guangzhou — at least according to the Vatican’s official diocesan map which was frozen in time when the Church was sent packing from China in 1951 by Mao Zedong. But in practice Hong Kong Diocese answers to the Vatican and is unique in the Catholic world as the only diocese with its own cardinal. Macau has never been part of any mainland diocese and is answerable to the Vatican. Beijing surely now wants them under its control.

Under the auspices of the CCPA, mainland China’s diocese and parishes have changed, as they would have under the Vatican had it still had any visibility of changing demographics.

Could it be that Beijing has asked the Vatican not to announce the new bishop’s appointment until the two sides can agree what to do with Hong Kong? The status of the Church in the city has suddenly became more problematic after the passing of the tough national security legislation. It is worth noting that Hong Kong Diocese and the Vatican’s unofficial representative in the city were reportedly hacked by the mainland ahead of the fresh talks.

This could spell trouble for the Church in Hong Kong, and the city’s Catholics surely feel this by now. The situation is compounded by Kong Kong’s unusual diocesan status under the Vatican and the Holy See’s near-obsessive desire to “normalize” relations with the Chinese Church at the expense of speaking out against rampant religious persecution and horrific human rights violations.

The national security law gives Beijing just legal cause to bring the Church and its outspoken leaders, led by Cardinal Joseph Zen, Bishop Ha and Hong Kong’s Diocese Justice and Peace Commission, to heel. The arrest of Catholic tycoon Jimmy Lai today is a signal that no one is safe.

The answer in Beijing’s mind is only ever more control, and for religion that means state-run religious organizations. This would be better, from both Beijing and the Vatican’s point of view, than going after senior clerics, which would surely be the last straw for the Vatican in terms of any new deal with Beijing.

The brutal reality is that the Diocese of Hong Kong’s days of independence are now very clearly numbered and the arrival of the CCPA, like Beijing’s increased control of Hong Kong, is only a matter of time. Acceptance of this by the Vatican would be a typical piece of realpolitik by Pope Francis’ chief diplomat Cardinal Pietro Parolin.

But the situation has the potential to create a storm of discontent with Pope Francis that could just derail his papacy. He should be very seriously considering whether such a battle — and it is coming one way or another — is really worth his deal with the devils in Beijing.