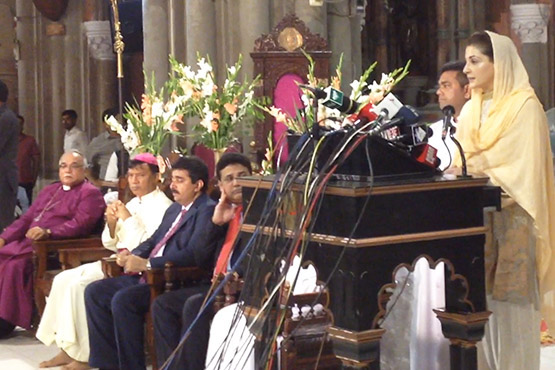 Maryam Nawaz, daughter of former prime minister Nawaz Sharif visited Sacred Heart Cathedral in Lahore on Sept. 1 and asked worshippers inside the cathedral to support her father, and criticized her political rivals.

After a former Pakistani premier's daughter made a controversial speech inside the Catholic cathedral in Lahore, acts and speeches deemed political are now banned in church buildings throughout the archdiocese.

It was the second church that Maryam visited during her election campaign for the seat in the National Assembly that was vacated after her father, the three-time premier was disqualified from holding public office July 28 for failing to declare some assets in his nomination papers.

"Pakistan does not need a change of prime minister but a change of judicial system," Maryam said addressing worshippers inside the cathedral. She called on worshippers to support her father and criticized her political rivals.

"In just two days, 6,000 people shared them on Facebook alone. Those who reacted or commented on them were in the thousands," Samuel Pyara, the Christian chairman of the Implementation Minority Rights Forum, told ucanews.com.

Social media users strongly condemned her for holding such an event inside the cathedral. Many commented negatively about how Archbishop Sebastian Shaw of Lahore blessed Maryam during her visit.

Father Gulzar via a circular said federal minister Kamran Michael, provincial minister Khalil Tahir Sindhu had requested Archbishop Shaw on behalf of Maryam who wanted to visit the church to pray for the recovery of her mother. "But after expressing the gratitude, her discourse became political. Her political speech at the Sacred Heart Cathedral has vexed us as well as all of you. Our sentiments have been hurt," he stated.

"His Grace Archbishop Sebastian Francis Shaw, himself, and church administration apologizes for this. It has been decided that although the doors of the church are open for everybody to pray, the church will not be used for political purposes by anyone in future."

However, Father Bonnie Mendes former secretary of the Pakistani Catholic bishops' National Commission for Justice and Peace, described the incident as "a grave error."

Lahore Archdiocese is based in the Punjab provincial capital with the same name. About 80 percent of the Christians in Pakistan live in Punjab, the most populous of the country's four provinces.