At 78, a human rights award winner is still fighting for equal rights for the persecuted minority in Myanmar 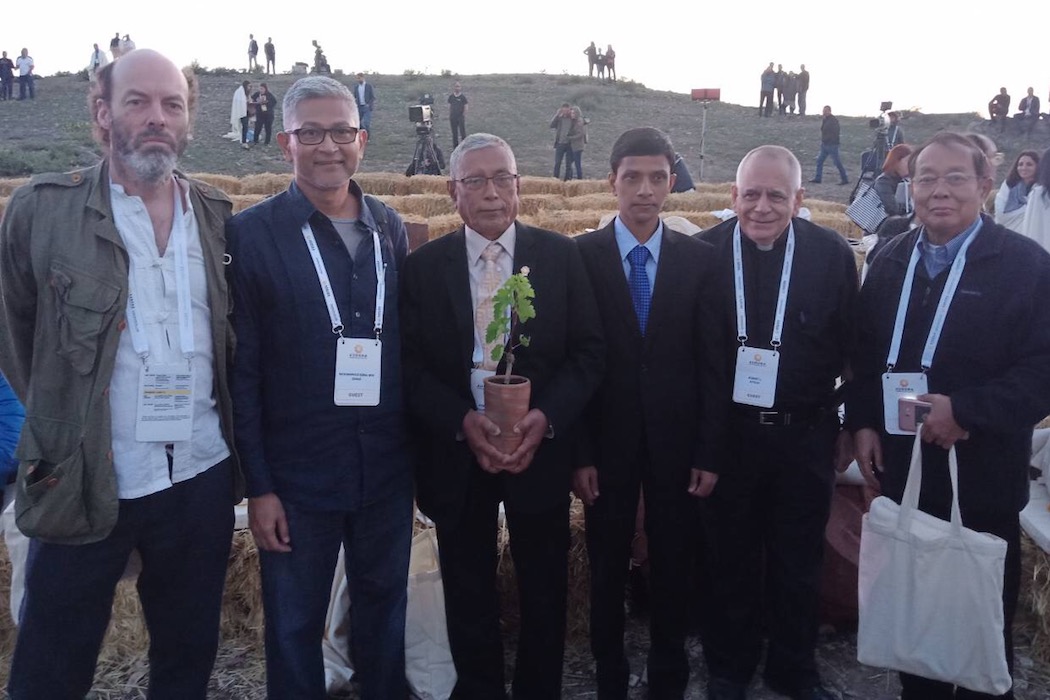 Aurora Prize for Humanism winner Kyaw Hla Aung (third from left) is shown walking with a delegation in Armenia in June. The prize was created in honor of the survivors of the Armenian Genocide and Aung collected it on June 10 for his efforts to eke out equal rights for the Rohingya. (Photo supplied)

Lack of access to education poses the biggest risk to the long-term survival of persecuted Rohingya Muslim communities in Myanmar, according to Rohingya human rights activist and former lawyer Kyaw Hla Aung.

"It's my personal belief that a lack of education can cause whole communities to disappear," the 78-year-old told ucanews.com.

Dubbed "a reluctant hero" by Amnesty International (AI) and "a modern-day hero" by the judges who recently awarded him the third annual Aurora Prize for Humanism, Aung has been jailed repeatedly for his work in Myanmar.

He was last released from prison on Oct. 7, 2014, after serving time for what he claims were trumped-up charges because the Myanmar government was concerned about him stirring up trouble.

"As I am a lawyer, they disliked that I was meeting with ambassadors and journalists, so they made up a case against me and arrested me," he told AI in April 2015.

By that point he was living at the Thetkaepyin camp for internally displaced people near Sittwe, the capital of Rakhine State. Aung, who is married with seven children, is still living there now more than three years later.

Despite such hardship, he has refused to cave to the regime's intimidation tactics and continues fighting for equal rights, with his recent focus shifting to education, healthcare and children. 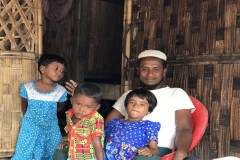 He established an education committee in 2012 to support schooling for Rohingya children and refuses to sit by while his people are restricted from freedom of movement, access to education and access to healthcare.

"Education is very important for the younger generations, so now my focus is on them despite the fact that we are experiencing funding and other challenges," he said.

Of living in the IDP camp he said earlier: "It's difficult for me to live here — I can't do things openly because the government is watching me." Aung has been heralded for drawing more international attention to the plight of the Rohingya, over 700,000 of whom have fled to neighboring Bangladesh in the wake of a brutal crackdown by the Myanmar military.

That began last August in what the army claim was a necessary response to insurgent attacks by shadowy militant groups like the Arakan Rohinga Salvation Army (ARSA).

However, when U.N. secretary-general Antonio Guterres visited Kutupalong refugee camp in Bangladesh's Cox's Bazar, not far from the Myanmar border, on July 2, the stories he heard painted a different picture.

Guterres, who was accompanied by World Bank head Jim Yong Kim, told reporters he heard "unimaginable accounts of killing and rape" during his visit to the camps, which together now house over 1 million Rohingya.

"It is probably one of the most tragic, historic, systematic violations of human rights," he said.

Later a clearly shaken Guterres took to Twitter to add: "Nothing could have prepared me for the scale of crisis and extent of suffering I saw today."

The refugees claim they many from their community were raped and killed by Myanmar soldiers, while their homes were torched and their villages razed.

The minority has for decades struggled to gain recognition in the country, where it has been stripped of citizenship and branded as illegal immigrants from Bangladesh.

Even now, with the world watching, Myanmar and Bangladesh are struggling to implement a repatriation deal sketched out in December as the Rohingya fear for their safety if not their very lives if they return home.

Yet Aung has not given up hope that a solution to these problems will be found. He has just extended the deadline by rechanneling his energies onto future generations.

"Receiving the Aurora prize has motivated me to keep fighting for equal rights and access to education and healthcare [for the Rohingya]," he told ucanews.com.

His name was whittled down from a list of 750 candidates for the prize, named in honor of the survivors of the Armenian Genocide and their saviors.

Also known as the "Armenian Holocaust," this cataclysmic event resulted in the loss of 1.5 million Armenian lives at the hands of the Ottoman government over an eight-year period from 1915-23.

Aung was awarded the accolade on June 10 along with a US$10,000 grant and a US$1 million donation that he can nominate three organizations to share.

He wants this to be spent on improving the lives and prospects of the Rohingya and has selected three charities that are actively working toward this goal.

Despite his acclaim and international recognition, however, Aung is still treated as a second-class citizen — technically, not a citizen at all — in his native Myanmar.

He had to inform local immigration officials of his plans to fly to Armenia to collect the Aurora prize and could only go if they authorized a travel permit for him.

The fact that he possesses a national identity card, or that his father was a civil servant, seems to carry little weight. "We've been living here for generations but now we are having our freedom of movement severely restricted. Is this justice?" he asked.

"The government needs to give us citizenship and the international community should also recognize the Rohingya as citizens of Myanmar," he told AI earlier.

"They are afraid of us because we are Muslims," he said. "They have been calling us Bengalis [from Bangladesh] since 1971. Their policy is to get the Rohingya people out of this country."

"I don't see much hope of the [refugees] heading home anytime soon," he added.

Moreover, conditions under the government of State Counsellor Aung San Suu Kyi — a former Nobel Prize laureate who is now trying to work with rather than against the military-led system — are worsening, Aung claims.

"We've lost trust in her," he said. "She stays silent on the Rohingya issue and fails to address the problems we face."

Myanmar denies citizenship and the associated rights to the Rohingya based on its 1982 Citizenship Law, which states only ethnic nationalities and others whose families entered the country before 1823 are entitled to these.

Meanwhile, some 120,000 Rohingya are currently confined to camps in apartheid-like conditions in Rakhine after sectarian violence erupted in 2012, leaving scores dead.