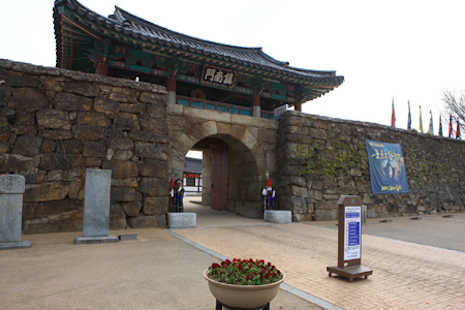 Haemi Martyrdom Holy Site, where thousands of Catholics were killed en masse between 1866 and 1882. (Photo by Korea Times)

Korea’s Catholic Church is noted for the sacrifices of martyrs in its early days.   In less than one week, Pope Francis will arrive in Seoul. Korea’s holy grounds are an important part of his August 14-18 trip.

The history of Roman Catholicism in Korea dates back to the 16th century when Joseon Kingdom (1392-1910) began trades with Western countries.

Solmoe Holy Ground is the pontiff’s destination on August 15 to attend the 2014 Asia Youth Day.   The pope will meet young Catholics of Asia at the sacred place and the birthplace of Saint Andrew Kim Tae-gon, the first Korean Catholic priest, who was later martyred.

Kim was canonized as a saint along with 102 other Korean martyrs when the late Pope John Paul II visited Korea in 1984.   Kim’s family was devout Catholics – there were 11 martyrs from the family, casting back to his great grandfather Jin-hu. The house was restored by the Roman Catholic Diocese of Daejeon in 1996 and designated as South Chungcheong Provincial cultural heritage in 1998.

The name “solmoe” comes from the Korean word for small hill of pine trees. In addition to the birthplace of the martyr, there are his statue, a shrine, memorial hall and Solmoe Arena on the holy ground.

The church is designed after the ship Kim took to  return to Korea from Shanghai, where he was ordained the first priest of Korea in 1844.

The Solmoe Arena commemorates the martyrdom of Saint Kim and his fellow Catholics during in Byeongin Catholic Persecution in 1866.

Kim was beheaded at a sandy site near the Han River in Seoul.   “Saint Kim strived for equality and freedom of Christianity, said Father Paul Lee Yong-ho, rector of the Shrine of Solmoe.

“He was a person ahead of his time, speaking five languages including Latin, English, French and Chinese, and was a theorist.”

The pope is scheduled to visit the Haemi Martyrdom Holy Ground and the Haemieupseong Fortress to meet with Asian bishops and closing mass for Asian Youth Day on August 17.

Haemi Martyrdom Holy Ground is the site where over 1,000 Catholics were buried alive between 1866 and 1882. The sacred place is also called “Yeosutgol,” as the martyrs prayed and sang “Yesumaia” (Jesus Maria) as they confronted death.

While the noble Catholics were taken to Gongju where governor was, nameless commoners were taken to Haemieupseong Fortress, one of the military bases in South Chungcheong Province.

As the number of Catholics increased exponentially, the soldiers felt difficulty in executing them one by one. Instead, they tied up the martyrs and buried them alive in a big hole outside the West Gate of the fortress all at once.

Some of the skeletons found at the site are on display at the Memorial Hall.   Despite the brutal history, the Haemieupseong Fortress is one of the most well-preserved town fortresses in Korea.