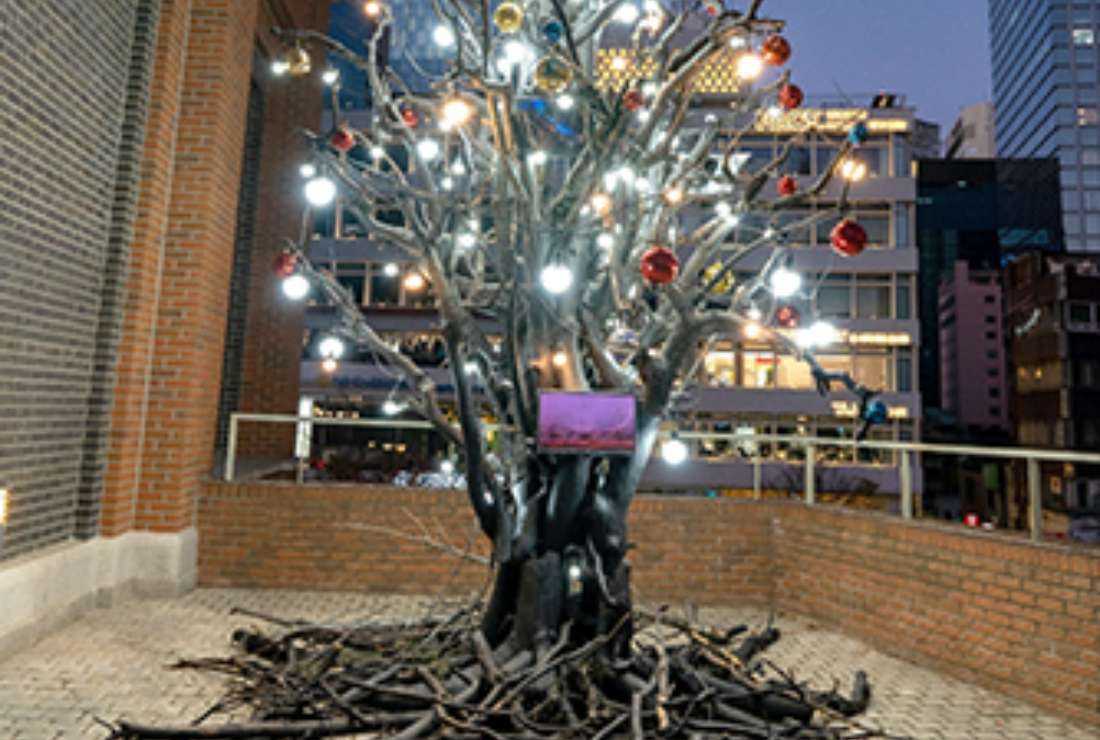 Seoul Archdiocese used charred branches and logs of trees from a recent forest fire to raise awareness on the environment and climate change. (Photo: CPBC)

Seoul Archdiocese in South Korea has installed a Christmas tree with charred branches and logs of trees from a recent forest fire to raise awareness of environmental issues and the climate crisis.

The Christmas tree was made with burnt logs and branches from the recent forest fire in Gangwon-do and lit up on Nov. 26, Catholic Peace Broadcasting Corporation (CPBC) reported on Nov. 29.

Professor Cho Seong-hyeon of Hansung University stated that every year environment-related themes are chosen to highlight the importance of climate action.

“We made a special Christmas tree at the end of the year using waste plastic as material in years when excessive plastic use became an issue. We want to share awareness about this,” said Cho.

Through the “Black Tree,” Professor Cho wanted those who saw it to “experience the seriousness of the climate change crisis” and care for their neighbors in need.

The environmental campaign will run until next August.

Forest fires are common in South Korea during the spring season which causes widespread damage to vegetation and property.

Earlier between March 3-4, NASA Earth Observatory reported the beginning of wildfires at Uljin and Samcheok with the help of its Moderate Resolution Imaging Spectroradiometer (MODIS) on its Aqua satellite.

Around 18,000 firefighters and dozens of helicopters were mobilized to fight the fires.

The wildfires damaged an estimated 512 facilities including 343 homes, and an estimated 16,755 hectares of woodland in Uljin. However, no casualties were reported.

The authorities evacuated 7,355 people in 4,659 households from the fire-affected areas.

The government later designated the eastern coastal areas ravaged by the massive wildfires as a special disaster zone and vowed swift support for the victims.

In one of its peer-reviewed open-access journals, the Switzerland-based Multidisciplinary Digital Publishing Institute (MDPI) pointed at climate trends as the main reason for forest fires in various parts of the world.

The data stated that “the frequency and intensity of forest fires continue to increase as ongoing climate change tends to increase extreme weather conditions.”

The study indicated that between 2010-2019, 58 percent of wildfires occurred in South Korea during spring and 23 percent occurred during winter.

The study also pointed out that occurrences of forest fires were less in summer due to the highly concentrated precipitation and high humidity in the region.