12,000 churches to be demolished under new government project 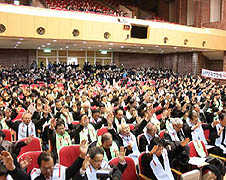 Protestants in the South Korean city of Incheon have gathered to urge the government to revise the country’s re-development plan to save thousands of churches from demolition. “The government should abolish the current re-development process,” said Reverend Rhee Kwang-sun, president of the Christian Council of Korea (CCK). The priest, of an umbrella organization for conservative Protestant Churches, on Jan. 6 addressed a prayer rally among 1,000 Protestant pastors, faithful and affected residents from the re-development areas. “Our Churches and other religious institutions in the re-development areas are discriminated,” Reverend Rhee said. According to the CCK, under the government’s re-development plan to demolish unnecessary buildings, 12,000 Churches will be destroyed. Under the Gimpo New City project, only two among 74 churches will be spared, while only three among 68 churches will remain under the New Town project in Incheon. “Current re-development process should be changed into rehabilitating one which redevelops part by part, so poor and rich people live together,” the participants said. They said the re-development only pursues profits and prevents resettlement of the Churches. Most Churches do not have enough land to trade for relocation to other areas and are renters not entitled to ownership in the new redeveloped area. They said the government needs to compensate the buildings and land with proper market price inclusive of interior equipment costs as some of the Churches are small and financially weak. Related reports Bishop slams government ´policies for the rich´ KO12754.1635