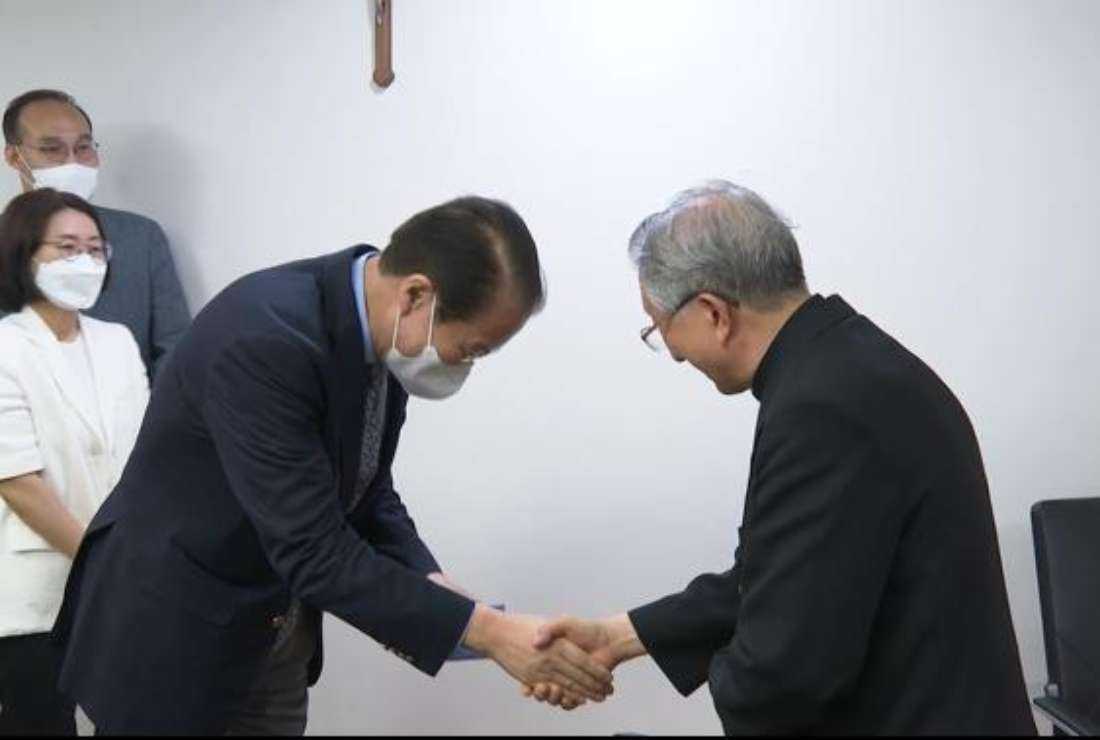 A South Korean minister has welcomed the possibility of Pope Francis’ visit to North Korea and his role as a mediator for peace on the Korean Peninsula.

"It would be a great help if the pope, not anyone else, would go and play a role for peace on the Korean Peninsula,” said Unification Minister Kwon Young-se during his visit to Archbishop Hyginus Kim Hee-joong of Gwangju at the archbishop's house on June 21, Yonhap News Agency of South Korea reported.

The meeting was part of Kwon’s initiative to seek an opinion from the leaders of seven major religions in South Korea to tackle various inter-Korean issues.

Archbishop Kim assured the minister that Pope Francis is eager to visit North Korea whenever he is officially invited.

The idea of a papal visit to North Korea was first floated by former South Korean President Moon Jae-in during his talks with North Korean leader Kim Jong-un. Moon met Pope Francis at the Vatican in 2018 when he invited the pontiff to visit North Korea.

Following another audience with the pope on Oct. 29, 2021, Moon reportedly told Pope Francis that if the pope does get an opportunity to visit North Korea, it would “create momentum for peace on the Korean Peninsula.”

The pope responded that he would “gladly visit” the North if he receives an official invitation.

"I will try harder to shift the currently chilled inter-Korean ties into a phase of the dialogue," Kwon said during a press conference this month to brief new President Yoon Seok-youl’s policy on North Korea.

He said he is willing to meet with North Korea's Unification Minister Ri Son-gwon “at any time in any format.”

Besides the discussion over a possible papal visit, Archbishop Kim also stressed the need to increase humanitarian aid for North Korean people who are reeling under severe drought and Covid-19 infections.

He particularly insisted on restarting dormitories for workers at Kaesong Industrial Complex in North Korea, near the demilitarized zone, and resuming inter-Korean railway connectivity.

"Religious groups tried to donate rice, but they said they couldn't bring in vehicles because of UN sanctions,” Archbishop Kim said during the meeting.

With the closure of its borders citing Covid-19 cases, North Korea has become virtually inaccessible to international envoys and other officials.

Inter-Korean discussions on reconciliation and reunification face hurdles. North Korea’s Unification Minister Ri Son-gwon is known for his hardline stance on Seoul and Washington, while President Yoon vowed to pursue a “tough policy” on North Korea and to teach some manners to “rude boy” Kim Jong-un shortly after he won the presidential election on March 9.

However, Archbishop Kim said he never stops dreaming of peace between the two Koreas. "My dream is for the leaders of the two Koreas to meet at Panmunjom to sign a peace agreement and the pope will come and guarantee it," he said.

Panmunjom is in the demilitarized zone established after the signing of an armistice that ended the Korean War.

Reconciliation and the reunification of the peninsula have been one of the priorities of the Korean Church and the Vatican.

North Korea does not have diplomatic relations with the Vatican, and no pope has ever visited the country.

Kim Jong-un’s father Kim Jong-il invited Pope John Paul to visit North Korea after the first inter-Korean summit in 2000. The Vatican reportedly responded by saying that a papal visit would only be possible if the Catholic Church was allowed to function in the country independently.